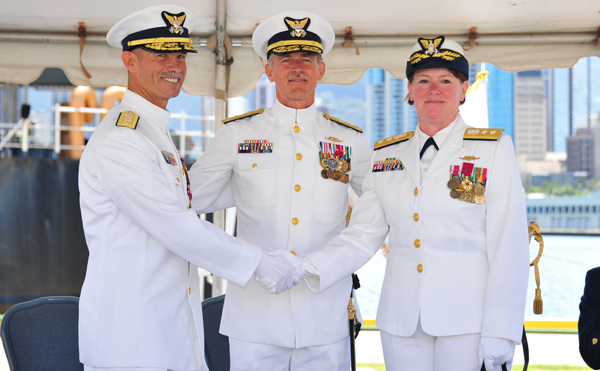 “I have loved the sea from my earliest days when my father took me to the ocean and taught me to sail.  I am humbled by the opportunity to serve in the 14th District,” said Thomas. “We will help those in distress, protect the public and preserve the sea in the Hawaiian islands and throughout the Pacific.”

Thomas most recently served as the Assistant Commandant for Response Policy where she oversaw the development of strategic response doctrine and policy guidance for all Coast Guard forces.

Previously Thomas served on Coast Guard Cutters Vigorous and Valiant, and commanded the Coast Guard Cutter Manitou. Other operational assignments include Group-Air Station Atlantic City and Commander, Sector Miami, Response Operations. Thomas served in the Enlisted Personnel Division of the Personnel Command as a program reviewer at Coast Guard Headquarters, the executive assistant to Atlantic Area, Fifth District and Maritime Defense Zone Atlantic Commanders and the Atlantic Area Resource Director. She served as the Commanding Officer of Training Center Cape May, served two years as the Chief of Staff to Principal Federal Official, Northeast Region, and as the predesignated Deputy PFO, Florida.

Her awards include five Meritorious Service Medals, a Joint Service Commendation Medal and four Coast Guard Commendation Medals among many other personal, unit and campaign awards. She earned permanent cutterman status in 1994.

Thomas graduated from the Coast Guard Academy in 1984 with a BS in civil engineering. She graduated with distinction from the Naval War College with a Masters of Arts in National Security and Strategic Studies. She also holds a Master of Science in Educational Leadership from Troy State University.

“It has been a tremendous honor to serve as the commander of the 14th Coast Guard District and I am very proud of the Coast Guard men and women here and all they have done to serve the citizens of Hawaii and the South Pacific,” said Ray.

Ray has served as the 14th District commander since October 2010 and is leaving to assume the duties as Deputy Commander for Pacific Area in Alameda, Calif. Prior to this assignment, Ray served as the Director of the Iraq Training and Advisory Mission for the Ministry of Interior and was responsible for leading advising efforts across all functions for the largest ministry in the government of Iraq. Prior to reporting to Iraq, Ray served as the Military Advisor to the Secretary of the Department of Homeland Security. In that position he provided counsel and support to the secretary in affairs relating to policy and operations between DHS and the Department of Defense. Ray has served in department head and command positions while conducting search and rescue, drug interdiction, fisheries enforcement, immigration enforcement and defense operations across the Caribbean, Atlantic, Gulf of Alaska, Bering Sea and pacific areas of operations.

Ray was cited for outstanding meritorious service as commander, 14th Coast Guard District, and awarded the Coast Guard Legion of Merit Medal. During his time in D14, Ray responded to increasing pressures on fishery resources throughout Oceania, formalized agreements with nine Pacific Island nations and innovatively deployed U.S. Navy combatants to support enforcement operations in remote areas. He leveraged partnerships with regional stakeholders in Australia, New Zealand and France to promote sustainability of living marine resources and enhance theater security by projecting an enforcement presence throughout a 20 million square mile region. In response to the unique challenges in the Pacific, he led the development of improved search and rescue procedures.

The change of command ceremony is a time-honored tradition and formal ritual conducted before the assembled company of a command to confirm to the men and women of the unit that the authority of command is maintained. The ceremony is a transfer of total responsibility, authority and accountability from one individual to another.