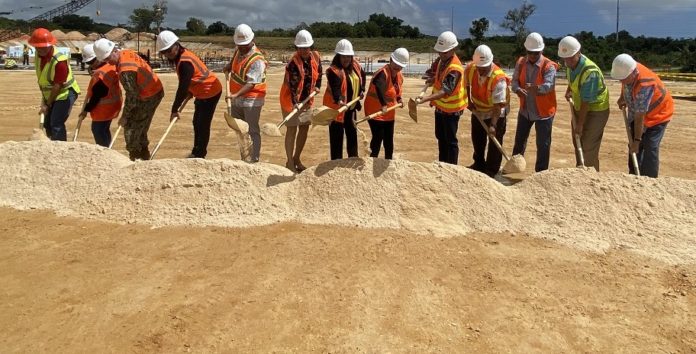 Department of Public Works Director Vincent P. Arriola spoke on which areas will be reconstructed. He stated, “Phase 1 is going to go from Carmen Memorial all the way down to the intersection of the Hilton Hotel and then Phase 2 will come in right after that and that’ll take it from the intersection here all the way to Marine Drive.”

Tamuning Mayor Louise C. Rivera reminded the public that the road would take longer than just regular area maintenance. She stated, “Even when we do close for a short time, just doing grass maintenance, cutting and all that. I mean, it is inconvenient but please understand it’s all for your safety. And now it’s going to be closed for a longer period of time and we just hope that you are all– that you all understand and help us be on the lookout for whatever– whatever issues need to be addressed.”

Governor Lou Leon Guerrero mentioned that the new roads would include bike lanes.

Governor Leon Guerrero stated, “As a result of the pandemic, right? More people are riding their bikes and it’s more a family kind of event and if we had more safe roads with it’s own bike lanes even more people will come out. So, this is the beginning of that trend to make sure that when we do provide new projects and road projects that we will also include bike lanes.”

Governor Leon Guerrero talks about the importance of investing in Guam’s future through infrastructure. Governor stated, “Our whole priority is focusing on the investment of giving back to our community and investing to the future of Guam”

The Governor also said that that there will be more road, utilities, and infrastructure improvement.