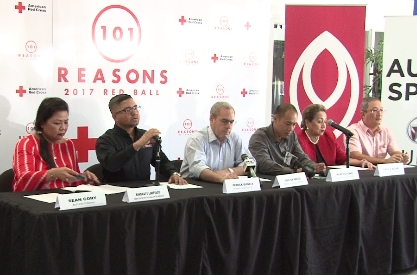 The Guam Chapter of the American Red Cross will be holding its 17th Annual Red Ball this September.

Guam – The Guam Chapter’s volunteers have focused not just on disaster relief but also on recruiting and training volunteers to help villagers help themselves.

A press conference was held on Wednesday, where it was officially announced Docomo Pacific’s President and CEO Jonathan Kriegel as this year’s Red Ball Event Chair.

“It is really my honor to be able to serve as the 17th Annual Chair of the Red Ball. 424 This is a very important event for Guam every year. 429 And the Red Cross plays such a critical role in the life of our community, 436 not just when we have the big typhoons or the big earthquakes, but on an annual basis. 445 The Red Cross is helping families whose homes are ravaged by fire; they are training people in our communities for valuable life-saving techniques,” Kriegel said. “Red Ball is also a real highlight of the Guam social season, famous for having the best entertainment every year. And although we’re not going to announce today exactly what the entertainment will be, rest assured that it will be spectacular. We wanted to focus on those people who really bring the Red Cross to life. The many, many courageous, selfless volunteers who give so much of their time. ‘101 Reasons’ — the idea is to celebrate the volunteers, celebrate those people who are also the beneficiaries of all of the good works of the American Red Cross.”

The Red Ball will be held in September at the Dusit Thani Guam Resort. And Guam AutoSpot is also doing their part to support the American Red Cross and this year’s Red Ball. In addition to donating the raffle grand prize — a 2017 Buick Encore Mini-SUV — AutoSpot President Derrick Muña Quinata announced that the dealership is collaborating with non-profit and school organizations, and invites everyone to test drive a Buick, Mitsubishi, or GMC tomorrow for the Red Cross.

“For every vehicle you test drive, we’re gonna be donating up to $20 per car. Our goal is $10,000. So, not only are we donating a car, we’re also gonna be donating up to $10,000. And if we break that number, we’ll donate as much as we can get people in to test drive. We wanna expose our product to the community, but we also wanna be able to donate. We’re not asking for money. We’re just asking for your time. Come down this Saturday, give us 10-15 minutes of your time, and we’ll donate up to $20 per test drive,” Quinata announced.

The “Drive for the Red Cross” Event will be tomorrow at Guam AutoSpot’s East Agana showroom from 9 a.m. to 4 p.m. You have to be at least 18 years of age with a valid driver’s license. AutoSpot will also be donating up to 50% of the commission of any vehicle sales that day to the Red Cross.