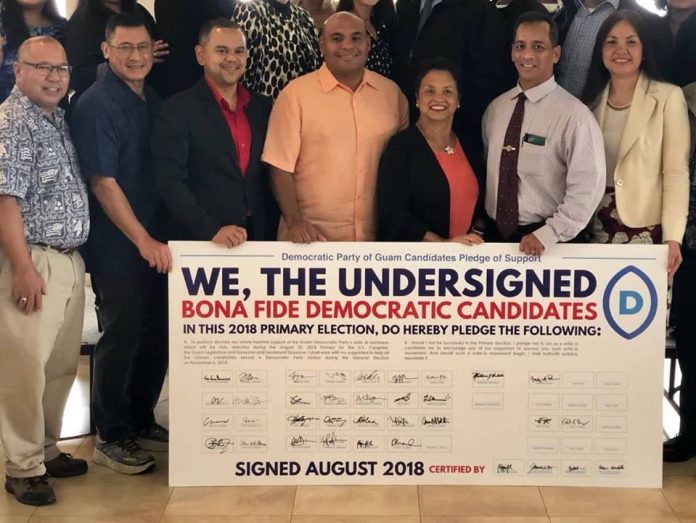 Guam – The Aguon/Limtiaco Democratic gubernatorial team has issued a news release expressing that the candidates are willing to break ranks with fellow Democratic candidates who pledged an oath to their party prior to a close primary election that saw the Aguon/Limtiaco duo edged out by competitors Leon Guerrero/Tenorio in an unofficial narrow margin of victory on Saturday, August 25. The full release follows.

A PLEDGE OR PEOPLE

Voters clamor for a choice, critics point to a pledge

Hagåtña, Guam – The Aguon Limtiaco team await a word on their pending request to the Guam Election Commission to conduct a hand count of the recent Primary election, which resulted in a razor tight lead of less than 255 votes for Lou Leon Guerrero and her running mate. Meanwhile, political action groups and a wide range of concerned business members and everyday voters have expressed interest in seeing an aggressive Write-In challenge in November; and critics try to deflect such talk by pointing to the Unity Pledge signed by Democrats last month.

Senator Frank Aguon’s response to the rising clamor for a write-in effort is pointed. “Alicia and I hear you. We’re deeply humbled by the outpouring of support during this past week. But, our focus has been on the recount process at this point.”

“We are bombarded by pleas from a broad range of people in our community, anxious business owners, disgruntled Republicans, unsettled supporters from other camps, and concerned citizens of all ages. They want us to continue the fight. Then there are the critics,” Aguon explains.

“‘Remember the pledge!’ they say. Well, I do. And I don’t recall any part of the pledge that says it is more important than the People.” Aguon argues. “I think using that excuse to deny the people and voters of Guam a lawful choice in their election is wrong. It magnifies the real question before us in this election: Who does this government belong to? To the rich and powerful who can afford to buy it; or to us, the people of Guam? That’s the choice before us – or the choice they are trying to keep away from the voters,” Aguon says.

“More than a million dollars, a record-breaking amount of money was spent just to win the Primary election.” Aguon continues, “A vast amount spent, for less than 1 in 3 votes cast for governor. Our Party has never experienced such a wildly unpopular ticket coming out of a primary.”

“It’s pretty clear,” Aguons adds, “A large segment of voters do not believe in continuing this direction: government for sale; by, and for, the rich and powerful that leaves the rest of us ‘out!’”

“Politics and parties are fine. But they are not, and never should be more important than the people and what the people want,” Aguon continues. “Alicia and I believe that people deserve their right under the authority of law to exercise all options available to them to elect their leaders, not just settling for what they think is the ‘lesser of two evils.’”

According to Aguon, “A write-in has never been successful in almost 40 years in Guam’s political history, but if that’s what the people of Guam want, we will give that option the consideration it deserves.  Alicia and I understand the importance of party and its role in our democracy but we are also cognizant that, the true power in this democracy lay with the people. The write-in provision is afforded to our people by law and the exercise thereof should not be infringed by any one person, team or party. Alicia and I have decided not to stand in the way of the write-in campaign started by Citizens for Public Accountability and Guamanians for a Fair Government.” says Aguon.

Should you have further questions or would like to request additional information,