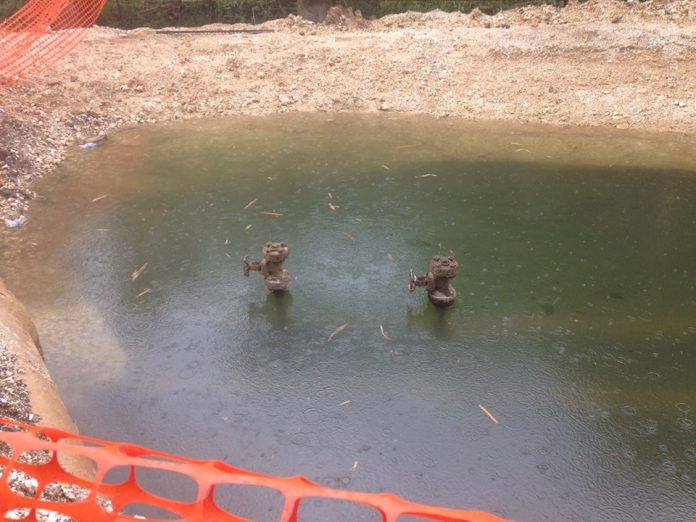 A source took this photo of a possible leak along the Toto Pipeline.

Guam – A concerned resident reported smells of fuel coming from a trench that was recently dug up. Our source says they reported the possible leak to the EPA on multiple occasions. We then talked to EPA administrator Eric Palacios who says that the Guam EPA is actively investigating the report of a possible leak along the Toto pipeline. Palacios says they have performed an initial spot check and they plan to travel to the site many more times during the course of the investigation. Just across the road, naval facilities engineering command was overseeing the excavation of a section of pipe. We asked Lt. Commander Matthew Mattivi if he knew of any reported fuel leaks across the pipeline and he said no. The work that is being done on the Toto pipe is part of a joint venture between NAVFAC and the nova group-underground construction company. A letter that was sent to residents in an apartment complex outside of the worksite advises residents that NAVFAC will be doing upgrade work on the fuel pipeline. The letter states, “the goal of our project team is to repair the fuel pipeline between Piti to Tiyan with minimal impact to the community and residences along the government pipeline easement. The letter says quote, “a joint venture will be conducting activities to construct a new fuel pipeline for the department of navy within the government pipeline easement beginning at Sasa Valley fuel farm, Piti and ending in Tiyan adjacent to the A.B. won pat international airport.”