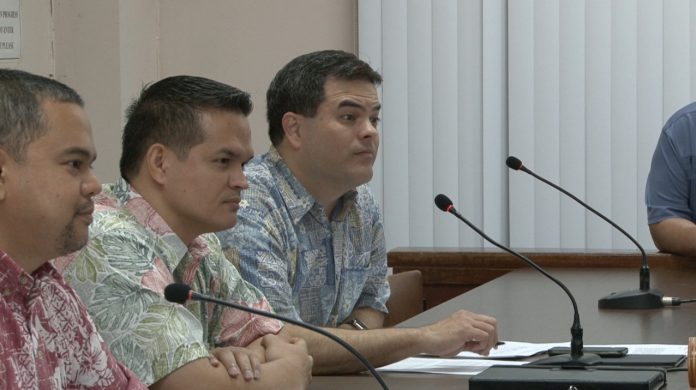 An argument between legislative staffer, acting in his personal capacity, John Paul Manuel and Senator Dennis Rodriguez broke out over a hearing for bill 184–a hearing Manuel says was illegal.

Guam –  Senator Dennis Rodriguez, tired of waiting around on a couple of bills stuck in senator Mike San Nicolas’ committee, held what one man called an ‘illegal hearing.

An argument between legislative staffer, acting in his personal capacity, John Paul Manuel and Senator Dennis Rodriguez broke out over a hearing for bill 184–a hearing Manuel says was illegal. According to the current standing rules, Senator Mike San Nicolas is the only Senator with the authority to hold a public hearing for bill 184, since it falls under his committee.

“People must know this is an illegal hearing, legal counsel says this is not within the laws. This is another example of an illegal hearing that puts the raises and retro’s outside the rules of public hearing,” said John Paul Manuel.

The issue is over bill 184, introduced by Senator Dennis Rodriguez to provide incentive pay for Division of Environmental Health workers. Senator San Nicolas, who has oversight, held bill 184. He told DEH officers in a private meeting that the funding was not available. The bill has been in San Nicolas’ committee for seven months.

But Senator Rory Respicio points out that Senator Rodriguez Jr.’s hearing is strictly defined as an ‘informational hearing.’ The chairman of the committee on rules says that allowing Rodriguez to hold a ‘public hearing’ would set a dangerous precedent for other senators.

“I have to mindful, that along with Senator Rodriguez, there’s 14 other members of the legislature that are all in a similar situation where they may feel like there bills aren’t publicly heard. And if we allowed one instance where this committee was going to go above and beyond what the standing rules provide, we are not going to have order in this institution,” said Respicio.

Despite the arguments, DEH officials largely supported the bill, even going as far as to say Senator San Nicolas is wrong about the lack of funding for the bill. DEH workers who spoke at the hearing said they are worried that the bill will die in san Nicolas committee, where it has been for seven months without an official public hearing.

In the private meeting, San Nicolas told DEH workers that their funding source for the bill “looked good on paper’ but was not practical. DEH Administrator Tom Nadeau says that to his knowledge the money to fund an incentive pay program for DEH workers is available.

“I can only say what’s indicated on is 400 and there is money there in the account,” said Nadeau.