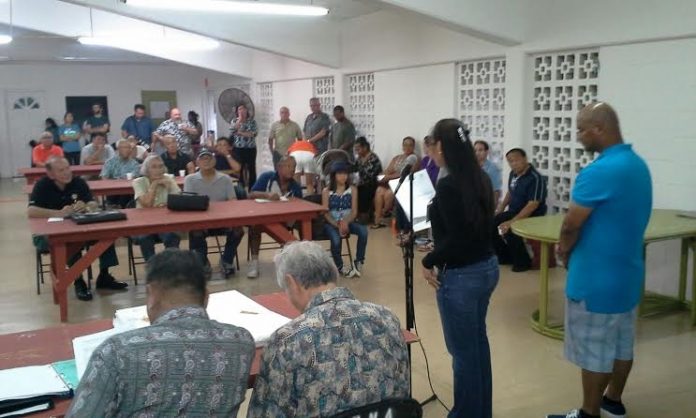 The proposed twin tower condo development near the mouth of the pago bay river received a lot of criticism and opposition from residents who will be affected.

Guam – Numerous residents were visibly angry when they voiced their concerns about a proposed two tower high rise condominium in the Pago Bay area. Yesterday the Guam Land Use Commission held a public hearing on the proposed project.

“The land crab coconut crab mangrove crab. That is their route to recycle…to mate right?” said a concerned elderly Chamoru man who did not give his name adding, “You ruin the beauty of that area and how in the world could a developer build a condominium right at the mouth of the river? What kind of fertilizer? What kind of chemicals do you use to clean the swimming pools or whatever you have in that area? When you build the condominium that river is right there. Don’t tell me it’s not going to affect the environmental aspect of it. I’m totally against it.”

Black Construction Executive Vice-President Tom Anderson lives near the proposed development. “The Pago river is not stable. Come heavy rains that thing swells to the point it runs over the bridge floods the entire area and you’re talking about having a hotel that has a footprint that sits right in the middle as far as I’m concerned a flood plain. Now that’s an environmental problem I don’t know that you can overcome,” said Anderson adding, “So your saying maybe 700 to a 1000 people are going to now be in that area. Rt. 4 is a dangerous road down by the bridge and it is difficult to get in and out on that road during the mornings and evenings becuase of the traffic. If you increase that by 700 to a 1000 people you’re gonna have such an impact on the traffic control that it would be unbelievable. I don’t know what you have in mind as far as improvements are concerned but it’s gonna be something major to develop enough room for the vehicles alone…let alone the people.”

Anderson is also concerned about the demand on the water and waste water infrastructure. He says he already lacks the water pressure needed to get an adequate water flow into his house.

Project engineer John Sherman says they believe there is adequate sewer and water for the condos. “We think adding 300 units of this condominium it will not impact in fact it will actually help the performance of the pump that was originally designed for since it is underutilized,” said Sherman.

Others were upset about how the proposed towers would change the serene tropical landscape. “The towers will forever alter that beautiful landscape down there and what’s to prevent future developers from erecting other monstrosities in our beautiful area down there? This is the seed that’s gonna grow wildly and out of control. they do it once probably they’ll do it again,” said Adrian Gogue.

A representative of the developers, Richard Sana of FC Benavente Planners addressed the crowd saying, “I sense everybody’s desire to preserve the pristine condition of the island but you have to remember we’re growing in population all the time every year. Soon we won’t have enough land to build horizontally the only resource is to build up.”

Sana and other representatives of the developers were the ones facilitating or holding the hearing. Joanne Browne spoke in her personal capacity saying, “I’ve never been to a land use hearing where we’re here testifying to the developers and they’re responding to us when all these people here want to provide input. So who here is from the land use commission that is taking our testimony? So that when they have to make a decision on this we actually can see them face to face. So they know what the rest of us and sorry we’re not all transplants…I’m not here to debate you I’m not even here to listen to you because I know you’re gonna tell me how everything is wonderful and how you’re going to mitigate it. And Mr Sana you recall when Ladera towers was constructed I recall when Ladera towers was constructed because I was at EPA at the time. And you have relatives that live up there in Mangilao and when they built Ladera towers it has the capacity of a thousand people. They connected that to a two inch water line. They promised they would built two water wells for GWA. They promised they would upgrade the sewer line to the facility years later. It never happened. That’s why those of you that live up there or know people that live up there they can’t even get water to the second floor apartments and condominium units that are up there that were built many years ago because the impact of this development. The land use commission will set conditions. They will promise us the moon. They will tell us everyting is wonderful all this other stuff about wetlands is absolute B.S.”

The developers continued to assure the public that they would not negatively impact the environment infrastructure or the quality of life of residents in the area however most of the public remained skeptical.

Feds allowing use of ARPA money for RISE payments; applications can...