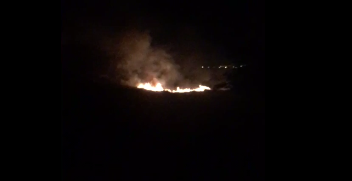 Guam Fire Department units, alongside Navy Fire, Andersen Fire, HSC25, and Forestry continue to battle the fire at Nimitz Hill, according to an update from GFD.

As of this time residents at the upper portion of Turner Rd. have been evacuated. Turner Rd. is closed to the public and residents are not being allowed back into their homes until the fire is no longer a threat.

The fire has spread to Chalan Famha in Ordot where units are battling this large scale grass fire as well.

All precautions are being taken to ensure the safety of all responders involved and the public. All units will continue to work on stopping the spread of the large grass fire.

GFD reminds the community to allow for enough space for emergency responders to travel on roadways.

According to GFD, in March alone, the department responded to 90 grass fires island wide.