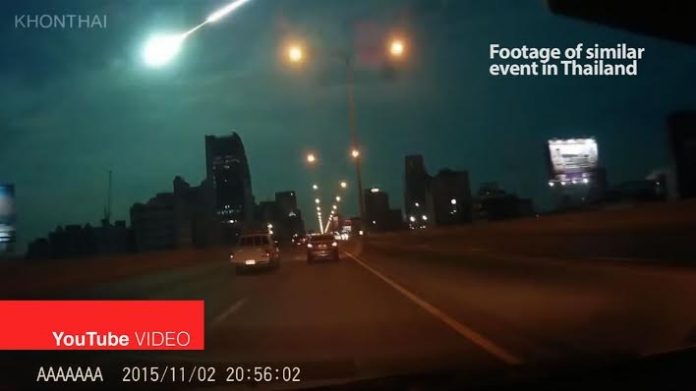 NWS says the reported bright blue light in the night sky was most likely caused by a meteor.

“There’s a lot of people that have been calling and Facebooking and all sorts of stuff trying to get some information because they said there was this weird blue light. Let me get John on the line because he saw it last night hey John good morning Dededo Mayor Melissa Savares is on the line too.” said host Patti Arroyo. “I was actually on the road up the street near the latte plantation and I saw that it was a blue light followed by a flame of fire. It’s a blue light at the front and a red and orange colored…like a tail,” said the caller who only identified himself as John.

Both Dededo Mayor Melissa Savares and Yigo Mayor Rudy Matanane heard of the reports of a blue light in the Northern skies. Even the National Weather Service received reports of this blue light. “We did receive on our Facebook page somebody reporting a blue kind of greenish blue light seen over Andersen Air Force base last night,” said NWS Meteorologist Brandon Aydlett adding, “The woman she mentioned seeing a kind of a bright flash of light that kind of just lit up everything some green some blue but also there’s a tail so I asked her for more details to see if it was like hovering or stationary because when there’s strange lights the first thought is UFO in the weather business we always think weather balloons but we wanted to find details find the answer.”

Aydlett believes he found the answer. The NWS meteorologist believes that based on the descriptions people likely saw a meteor. In fact Aydlett found a video of a meteor in Thailand on YouTube that matched the descriptions on Guam. The meteor produced a bright blue light.

“She said it was moving kind of streaking across there was a small tail probably some orangish colors maybe a little bit of red but then it kind of broke apart and then it kind of dissipated towards the water and then there are a couple of reports of booming heard on the Air Force Base,” said Aydlett.

The NWS meteorologist says depending on the atmospheric conditions, the size and composition of the meteor and the angle of entry a meteor can produce the colors described in the tail. As for the booming sound that can easily be caused by the meteor breaking the sound barrier as it plummets to earth. Aydlett says meteors can move up to 40 thousand miles per hour depending on the angle of their entry into the atmosphere. Depending on things like the pressure and temperature of the air, Aydlett says the speed of sound is anywhere from 600 to 800 miles per hour. “These things are definitely well in excess of the sonic barrier so as these things do enter the atmosphere there are large booms and these things can be heard for miles and miles around.”

In addition to all of this, Aydlett even sent the video of the meteor in Thailand to the lady who wrote the national weather service to see if the meteor in the video looked like the blue light she saw last night. “She said that looks very much like what she saw,” said Aydlett

Aydlett says the only difference the witness reported is that she saw the blue light break up into different parts and then sort of dissipate over the ocean which again is something that happens with meteors.

some people have suggested that the light could’ve been related to the military somehow. PNC reached out to Navy Public Affairs Officer Lt. Tim Gorman who says that the only thing the military was doing last night that could cause lights were some exercises involving HSC-25 helicopter training over Andy South and NCTS.