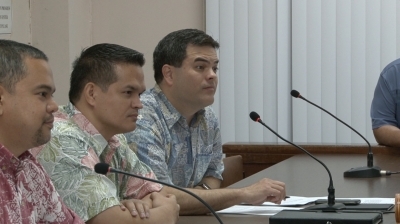 Guam – Infighting amongst democrats has caused three party members to go against Senator Mike San Nicolas’ committee and resubmit their bills to different committees to finally be able to hold official public hearings.

Tomorrow(Weds.) at a committee on rules meeting, Senator Rory Respicio, chair of the committee, plans to re-refer legislation that is currently being held in senator mike San Nicolas’ committee to other committees so the bills can legally see a public hearing.

“It seems like Senator San Nicolas is refusing to have public hearings on bills that have been referred to his committee. I want to make it very clear that this incident is isolated to this one senator,” says Respicio.

Senator Mike San Nicolas, however says he will block whatever re-referral comes up tomorrow at the rules meeting to take bills out of his committee.

“If certain senators want to work around the system and give out pay increases when we obviously cant afford it, I’m going to object and i hope we are able to halt that in its track because its just not responsible. (so you will object to the referrals?)..yes,” said San Nicolas.

Senator Nerissa Underwood, tired of inaction from San Nicolas’ committee as well plans to hold a public meeting on her bill 243, which authorizes the Governor, Lt. Governor and Senators to reduce their salaries. Senator Dennis Rodriguez Jr. Says he plans to introduce a resolution to amend the standing rules and reinstitute the ‘120 day’ rule.

“No one senator could ever have that kind of power, we are a deliberative body, our people elect 15 senators and so we must work in that fashion,” said Rodriguez Jr.

The rule, which was instituted by then minority senator and current Vice Speaker B.J. Cruz and then speaker Mark Forbes, says that the author of a bill may hold a public hearing if the chairman of the committee chair fails to move it out of committee–the exact situation Senator Rodriguez is in today.

But the rule was taken out when the democrats took the majority in the 33rd. Respicio says they removed the provision because prior to these ‘isolated incidents’ with Senator San Nicolas’ committee, there was no longer a need for the rule as they made sure everyone, even in the minority had a voice.

“At this legislature, that provision was taken out because prior to that there was no problem,” says Respicio.

The committee on rules will meet tomorrow at 9 a.m.

Senator Underwood will have her public meeting on her bill 243 tomorrow at 530 in the public hearing room. The meeting will not be broadcast on the legislatures channel because it is not an official hearing rather it will be streamed live via the senator’s Facebook page. You can submit feedback on Underwood’s bill at nerissanunderwood.com/listentomeon243.