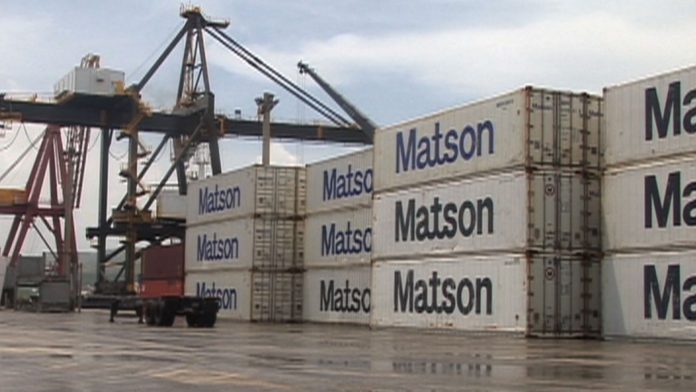 Guam – Matson has announced that are lowering the fuel surcharge for shipments to Guam, the CNMI, Hawaii and Micronesia

The drop of seven percentage points is a result of continuing declines in bunker fuel prices. On Guam the surcharge will go from 32% to 25% effective February 15th.

That’s the good news regarding shipping today. Distributors and retails meanwhile continue to watch events unfold on the west coast as a labor dispute threatens to halt shipments.

The Pacific Maritime Association is waiting for the International Longshore Warehouse Union to respond to an offer as a part of ongoing contract negotiations. 13,500 union workers have been without a contract since July and tensions have already slowed down port operations.

Michael Hansen of the Hawaii Shippers Council spoke with K-57’s Ray Gibson this morning and said the west coast is about five to ten days away from a lockout which happens when congestion in the container terminals is so severe that work can no longer continue.

If that happens, Hansen says the impact on Guam wouldn’t be felt immediately.

“For cargo loaded on the west coast its about seven days to Hawaii and about two weeks to Guam and so as long as some ships can get away over the next week or so that probably means that we’ll be good here in Hawaii for about for you know maybe a couple of weeks and the same maybe on Guam,” Hansen said on the Breakfast Show.

So far Guam hasn’t felt much of an impact. Triple J Five Star General Manager Jim Herbert told PNC yesterday that his company has had no problem receiving shipments so far.