The Government of Guam Retirement Fund (GGRF) and the Guam Bankers Association (GBA) have both penned letters to Speaker Tina Muna Barnes, in response to her inquiry about the feasibility of proposals made by Congressman Michael San Nicolas. 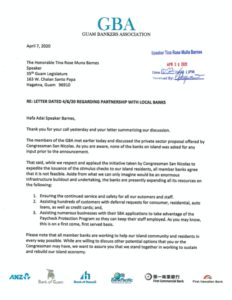 Both entities made it clear in their letters that San Nicolas’ proposals are not only infeasible, they will also not come to fruition in the one-week timeline he had proposed.

On Monday, the Congressman laid out his suggestions for getting Guam residents federal coronavirus one-time impact payments and unemployment assistance, as soon as one week from now.

His first solution involved the Guam Economic Development Authority (GEDA) signing an agreement with the GovGuam pension fund to buy a bond, in essence. GEDA would then use the cash borrowed from the Retirement Fund to pay Guam residents the economic impact payments. The money borrowed from the GGRF would be guaranteed by the government, according to San Nicolas, with interest paid back to the pension fund by the $10 million coming to Guam for local war claims (money the Governor has already appropriated for other priorities).

San Nicolas’ second proposal would have the same structure, but with the local banks funding these bridge loans. San Nicolas had said the bank-funded option is less complicated than the one with GEDA and the pension fund.

In both these scenarios, local residents would authorize their federal payments to go directly to GEDA or the banks, to pay back this “pay-day” loan of sorts.

Muna Barnes, who was on the Monday Zoom conference call with the Congressman, followed up with the GovGuam Retirement Fund and the Bankers Association to get their input on the feasibility of these options.

Both entities responded on Wednesday, both making it clear they were not consulted before the Congressman made these proposals.

For its part, the GBA said, “while we respect and applaud the initiative taken by Congressman San Nicolas to expedite the issuance of the stimulus checks to our island residents, all member banks agree that it is not feasible.”

Untalan said because of these major tasks, island banks do not currently have the resources for the proposed, “enormous infrastructure buildout and undertaking.”


While the GovGuam Retirement Fund Director, Paula Blas, wrote that “the Fund takes no position on the relative payment scheme discussed in the proposed plan,” she made it clear that it was not feasible since the GGRF does not have the cash liquidity to undertake the agreement.

In her letter, Blas writes, “the Fund does not hold $142.8 million in cash…With this proposal, the Fund would have to liquidate (sell for cash) its existing investments in order to be able to loan funds to the Government of Guam.”

The $142.8 million figure was borne out of San Nicolas’ proposal, which he claimed would be the amount GEDA could borrow at a 7% interest rate, paid back by the $10 million in local war claims reimbursement money.

In the GGRF letter, Blas wrote, “the Fund does not have the ability to extend an over-the-counter private loan with an arbitrary interest rate.”

“The Fund is a fiduciary investment pool that executes investment strategies that are subject to governing statutes and policies. Mandating the Fund to extend a loan via legislation would be inconsistent with the fiduciary standards governing the investment practices at the Fund,” said Blas.

The GGRF also explained that current market conditions have already impacted the fund’s investment returns and that, “selling securities at this time will disrupt the Fund’s ability to pursue its long term investment strategy. This, in turn, may jeopardize the ability to pay pensions for thousands of retirees today; and thousands of employees who will retire.”

In his Zoom conference on Monday, the Congressman invited only Speaker Tina Muna Barnes and Republican senators Mary Torres and Jim Moylan, along with media, to outline his two possible avenues to get Guam residents federal economic impact payments, sooner.