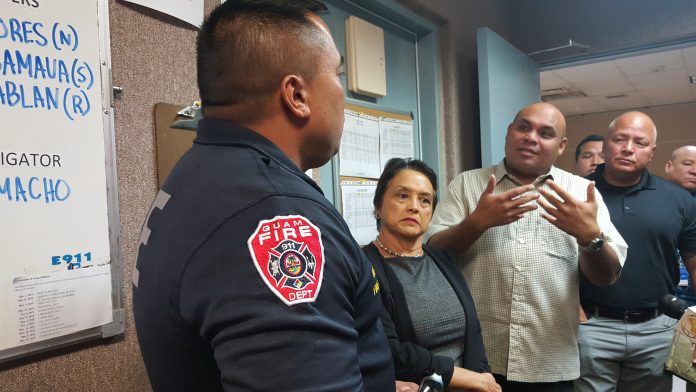 Guam – The Emergency dispatch center may be antiquated but it’s still in operation. The E-911 Call center quickly became the highlight of Governor Lou Leon Guerrero’s tour of Guam Homeland Security, Office of Civil defense, as the Guam Fire Department brought the Maga Haga up to speed on efforts to procure a Next Generation E-911 call-in system.

With the funds from the E-911 special fund to be returned within 120 days as ordered by the Public Commission on Utilities, Guam Fire Department Assistant Chief Joey San Nicolas stated that the department will have the ability to purchase a New Generation 911 system outright instead of leasing it.

For many years GFD has been working to upgrade the anitquated system to the NexGen E911 system, which according to San Nicolas is one step closer to the procurement .

“The last day to pick up packets was last Friday we got a questions and answers period which ends this Friday and March first is the last day to submit proposals. San Nicolas continued stating,You’ll be happy to know that under Chief Dan’s watch and your watch you will see a Nex Gen 911 system, there’s no doubt about it.”

It has taken years to get to this point and with the 3.8 million dollars from the E-911 fund being wrongfully taken from the fund it raises the question whether that has contributed to the delay.

“Money was never the issue otherwise we wouldn’t be able to move forward with an RFP to begin with how we enter into the contract now is where the options are. As you committed the money to be returned we have now the option to do an outright buy versus the intended lease program that we were going to do,”

Governor Lou Leon Guerrero backed up San Nicolas stating that there is money there and shared an idea they are considering.

“One of the things we are thinking about is this the opportunity to maybe merge the communications system with the public safety and maybe go out as one big RFP or contract so we can get maybe better grade and also at a much more discounted rate,”

As for the 3.8 million dollars which the Maga Haga has committed to return to the fund, she stated that transferring those funds from the general fund will not have an impact on any other government agency.