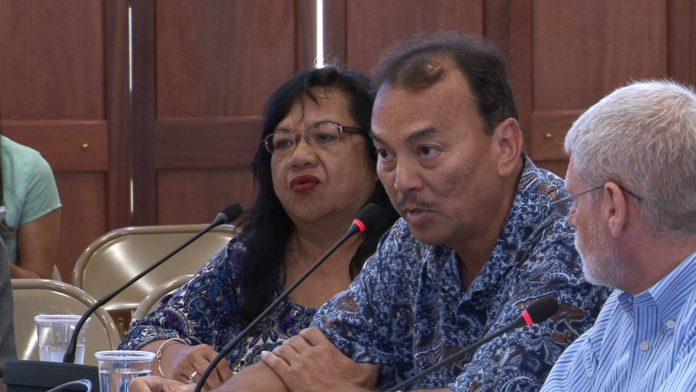 Guam – The Special Economic Services committee met Tuesday at the legislature for the first time since senators passed a bill raising the business privilege tax by 1% on April 1st and creating 2% sales tax that begins in October. While these tax increases are helping GovGuam cover its shortfall the Public Auditor says more could be done to improve collections for taxes that are currently owed.

“As far as income is concerned march is not one of the best months that we expect, and we came in roughly within 5 percent of where we expected to be,” said Department of Administration Director Edward Birns.

In addition to this there is still $34 million dollars owed to GovGuam vendors.

Speaker Cruz says he’s been working on finding additional sources of revenue to replace the 1% increase to the BPT and the soon to be 2% sales tax. On Monday he held a public hearing on two bills one to raise property taxes and the other to raise taxes on alcohol and tobacco. However, the Speaker says the biggest pushback has been from people who say GovGuam needs to focus on improving its collections of existing taxes.

“We do aggressively collect on the receivables,” said Department of Revenue and Taxation Director John Camacho adding, “As far as collections, we’ve been doing a lot of collections. We’re gonna try and get those ten revenue officers in as soon as possible as far as the stamped tobacco we are meeting with stakeholders on April 10 to address this machine and all these responsibilities that we’ll be moving forward on the stamped tobacco.”

“With all due respect to Department of Revenue and Taxation the biggest challenge that they face is they continue to be a manual operation. We have two audits ongoing right now. One is on tobacco tax and there are significant control lapses there that are occurring. This is where taxes are supposed to be taken upfront but the bonded warehouse there’s no reconciliation between what is brought in and what is brought out,” said Public Auditor Doris Flores Brooks.

“Likewise in the real property tax audit that we are doing right now we see the significant amount of accounts receivable let me just say for the record those accounts receivable that are on the books of Department of Revenue and Taxation is not on the books of the Department of Administration,” said the Public Auditor adding, “An audit on gaming tax. Again, as I reported they were behind almost a year in the posting of the manual returns. To even know who did file who did pay.”

Rev&Tax Deputy Director Marie Benito said they will continue to do their best to collect as many taxes as possible.

As far as the overall financial condition of GovGuam, Bureua of Budget and Management Research Director Lester Carlson said that GovGuam will be okay as long as the recently raised taxes aren’t rescinded.