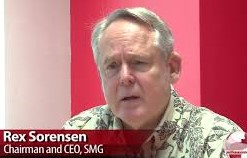 For employees of the Sorensen Media Group, Rex Sorensen was not an ordinary boss —  he was a father, friend, mentor and inspiration who opened the door to many, giving each of them a chance to succeed. He built an institution on Guam, which has produced quality broadcast journalism that is unafraid to tell the truth and upholds unfettered speech.

Sorensen passed away on Sunday. He was 73.

Patti Arroyo: “He cornered me in Hawaii; he sought me out for several years to come to Guam. He was from Hawaii and familiar that I was on the radio there. He just kept coming after me and finally when I was ready to come, it was in 1994. Almost from the moment I stepped in the door, he always had a plan for something that I was going to do that I didn’t know I was going to do. I appreciate that I was able to build a life for my kids and my family through his belief and loyalty.

“What I think foremost is what he did for this company and what he did for this community. He was trusting in our product and in our own dedication to journalism. He never interfered with the work that we were trying to do from radio —  when we were all doing radio news to TV when it became another platform. He respected photo journalists, the camera men who were capturing these images that tell stories. He never interfered with the truth and that I think was his legacy.”

Shin Taira:  “It’s hard to calculate the impact this man has had on the island. Countless organizations and people have been helped through the platforms Rex created and supported. His tenacity was legendary. Guam truly has lost a titan of industry.

‘Being fortunate enough to work with Rex for the last several months I have been truly impacted by his work ethic his ability to keep everyone within the organization at heart and truly care about everyone from the hourly part time to the maintenance staff to all of our upper management team Rex truly displayed interest in what everyone here at Sorensen Media Group did.”

Shimmy Washington: “I met Rex Sorensen back in 2015 when I first moved back to Guam. What an amazing man he was. I have never seen Rex have a bad day. Even in his tougher times, he was always laid back. He was so warm, so welcome and I want to thank him personally for taking me into the SMG family and getting me started in my career in radio. Honestly, he is the founder of Sorensen Radio, so I don’t know where I would have been without him.”

Pauly Suba: “My fondest memory of Rex Sorensen was when we were in meetings discussing the new format that you hear right now, which is Kat FM. He was talking about how I hate rap but ‘I believe in you guys and you guys are the voice and you guys are the ones that have something to offer to your generation so what you want to do with KAT FM, I totally believe I’m totally on board for.’ That’s Rex Sorensen. It’s his car but he is allowing us to drive it. I will never forget how he cultivated this business into a company that allows people to thrive and just become better in themselves.”

Sen. Régine Biscoe Lee issued the following statement:  “Today, I join the island in mourning the loss of Rex Sorensen. By his vision, hard work, and tenacity, this community found a new way to talk to each other, and maybe even more importantly, to listen to one another. While he was never as public as the personalities he brought into our homes, we were all touched by his life’s work. We were all bound together by it. We all heard the music, woke up to the lively debates, and huddled around the radio during typhoons. As we remember his life and wish him eternal rest, we extend our deepest condolences to his wife, Mimi, his family and friends.”

Sorensen, a founding board member of Air America Radio, was a graduate of the University of Oregon and was a certified public accountant.

He started his career in Hawaii as a real estate developer. Sorensen then became a media investor and broadcaster in the Pacific.

Sorensen is the CEO of Sorensen Media Group, a privately held media and entertainment conglomerate, and the largest broadcast company in the Western Pacific with holdings in television, radio and Internet programming, development, production and broadcasting.

Sorensen began his media broadcasting career in Guam with Newstalk K57, which he began as a music-oriented station in November 1981 and converted to a news talk format in 1985. He is the reason one of the island’s favorite talk show hosts came to Guam, helping to launch the flagship show K57.

Sorensen is survived by his wife, Mimi, and three children.