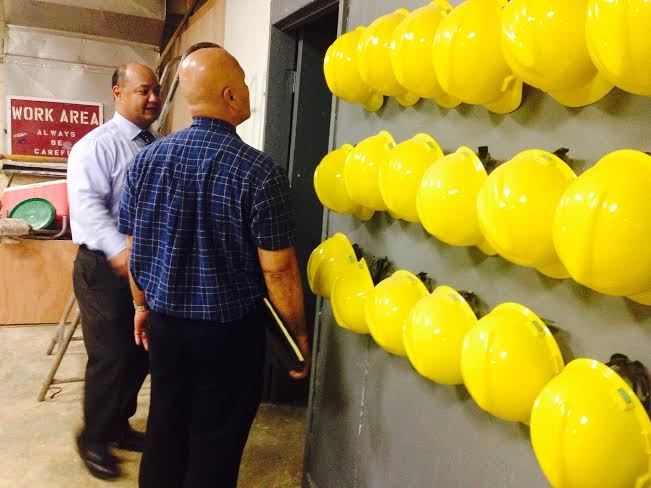 It’s been almost two years since Simon Sanchez High School students voiced their concerns to the Department of Education about the horrible conditions in their school and as of yet, the Request for Proposal to fix their school is still not complete.
The school administrators took Department of Education Superintendent Jon Fernandez and Department of Public Works Director Glenn Leon Guerrero on a school tour today and showed them what the major problems are, which include leaks in the ceiling, lack of new awnings, restroom issues, and the need for a new sports facility. Simon Sanchez High School Principal Carla Masnayon tells us what she hopes the outcome will be.
SSHS Principal Carla Masnayon says, “There’s really a lot that I’m hoping for the school. I just want to make sure that whatever comes out of this, it’s going to be a school that’s safe and conducive to learning so that means the classroom needs are addressed, that the sports facility are addressed so our students don’t need to go to a different field for home games, or we don’t have to move our students around because there’s problems in some classrooms. I’d also like to have teachers have their own classrooms instead of sharing so they can focus a lot of their resources on that one room.”
It was over two months ago when elected officials and DOE were in discussions for a 100 million dollar RFP to finance renovations at Sanchez and other public school campuses.
Annual payments were to come out of the Territorial Education Facilities Fund, which is anticipated to receive millions of dollars each year from increased real property revenues.
Leon Guerrero says his goal is to get the RFP out by mid-March.