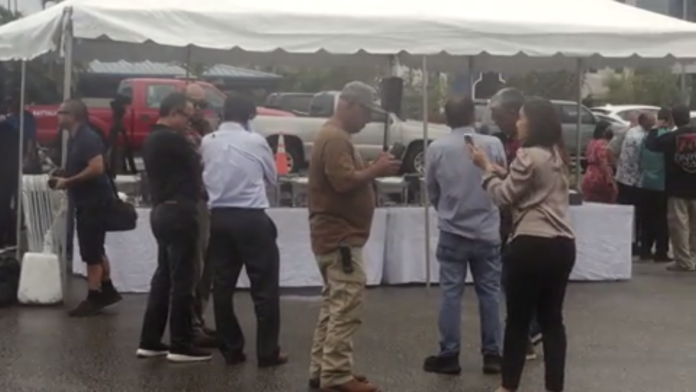 Earlier today – as Ribbon Cutting Ceremony was held at the Mark V. Pangelinan Parking Lot for the Route 1 Resurfacing Project.

The road resurfacing includes areas from Route 30 to Route 10A, totaling 11 miles of land. Route 1 has a traffic volume of 33,000 vehicles per day. Contracted by Hawaiian Rock Products, the asphalt used weighed approximately 4,700 tons and was designed by WSP USA Inc. The contract cost $7.2 M by DPW Division of Highways.

The ribbon-cutting was hosted by Director of the Department of Public Works Vincent P. Arriola. The speakers at the event were Governor Lou Leon Guerrero, Lieutenant Governor Joshua Tenorio, and Tamuning Vice Mayor Albert M. Toves.

VINCENT P. ARRIOLA, DEPARTMENT OF PUBLIC WORKS DIRECTOR stated, “We finally have a really nice portion of Marine Drive that’s been needing a repaving for the last 10, 12, 15 years. 25 years.”

Prior to the resurfacing, this area of Marine Drive posed a threat to security and travel.

JOSHUA TENORIO, LT. GOV. OF GUAM stated,  “…with regards to national security; this is a very, very, very important road. This is the main connection between the north and the south– the connection for commerce and business, and definitely a connection to family.” —

According to one of the speakers at the ceremony, “The road was used every day without restoration in the last 25 years.”

Albert M. Toves Tamuning Vice Mayor stated, “…but in due time our road really got messed up with all the traffic that we have. And like I said, it’s been long overdue. And now we have a beautiful road out here.”

Governor Lou Leon Guerrero believes that repaving the road is the start of a better future.