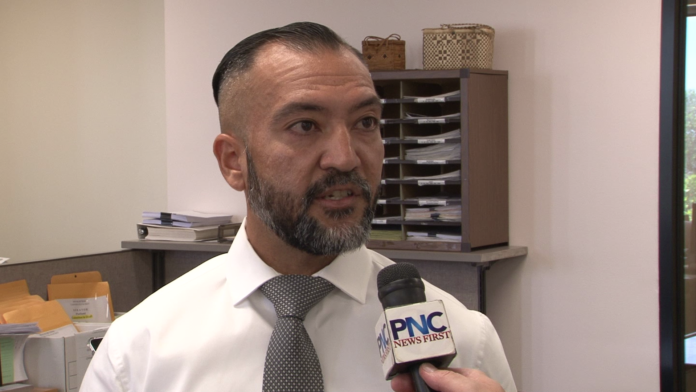 Guam – You may be wondering why Clynt Ridgell is no longer sitting on the PNC News desk. Today, he officially announced his candidacy for senator.

“Why did I decide to run? Why am I running for senator? Well a lot of it has to do with the fact that I have worked in the media for over a decade,” announced Ridgell.

Ridgell has nearly 15 years of experience in news media and spent most of the last decade covering politics. Ridgell says he feels the government is broken and it’s become more difficult for him to sit on the sidelines and just watch. This broken system compelled him to throw his hat into the ring with the hopes of restoring faith and trust in government which will be rooted in honesty.

Speaking of honesty, Ridgell took it upon himself to reveal some negative marks that may come up on his record.

“I have a couple of dings on my record, negative marks on my record. One is a reckless driving and the other is a misdemeanor that stems from a stupid bar fight I was involved with as a young man, really a young punk. So these are mistakes that I’ve made in the past,” explained Ridgell. “I feel that I have learned from these mistakes and that’s the important thing to me and I believe that those mistakes have led me to change my path, change my direction.”

If elected, Ridgell will make history as the first Chuukese to hold office on Guam. Ridgell is of Chuukese descent and he says he hopes to be a voice for the FAS people on Guam.

“For people at home who don’t know, I’m of mixed heritage: half Caucasian, American, white, and my mother is Chuukese. I’m half Chuukese. She’s from the island of Ta in the Mortlock islands district, of the state of Chuuk in the FSM. I’m very well aware of the issues of the FSM, the FAS people, something I grew up with, it’s something I’m very well versed in and I will be … a tireless advocate for the people of the FAS and the FSM and I see myself as a bridge between those communities and the community of Guam,” said Ridgell.

Ridgell ended his announcement by saying that he is a hard working family man who believes in and loves Guam and hopes to earn the trust of the people as a senator just as he’s earned it as a journalist.