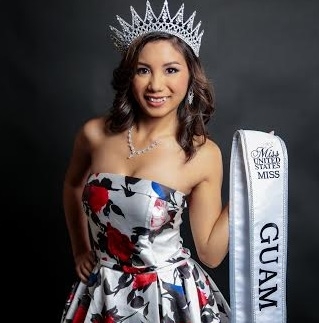 Guam – Here’s something to be proud of: A Chamorro woman will be representing Guam in the Miss United States pageant.

21-year-old RitaLyn Tagura was crowned the 2016 Miss Guam United States in a pageant with along with Miss Hawaii and Miss American Samoa in Honolulu in April. Tagura will be the first Chamorro to compete and also represent Guam as the Miss United States national pageant sought to include delegates that will represent all five U.S.  territories in Las Vegas at the Palms Resort in the coming weeks.Tagura’s parents are Rosalind and Chris Camacho of Ordot and Agana Heights, Guam. Miss Guam United States 2016 is a graduate of George Washington High School in Mangilao and is currently in her third year at Kapi’olani Community College in Honolulu, Hawaii, pursuing a Bachelors of Arts in Early Childhood Education. Since her crowning, Tagura has hit the ground running with her community outreach and volunteerism. Her platform is educating on marine and wild life; as well as, promoting child education and a positive lifestyle for kids and teens in afterschool activities.