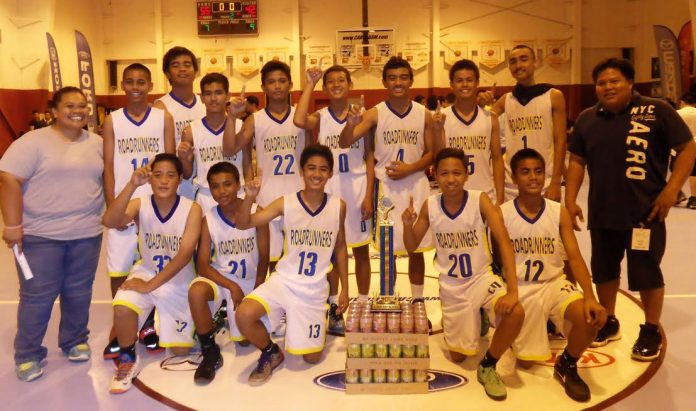 “It has been an exciting week for the teams and fans watching back to back games under one roof. The atmosphere in the gym was electrifying with each intense game played,” stated tournament coordinator Elsa Ulloa.

The tournament started with 12 teams and ended with three from GDOE’s league V.S.A. Benavente Roadrunners, F.B. Leon Guerrero Hawks and Inarajan Middle School Warriors. The St. John Knights represented IIAAG in the final four teams remaining. The Roadrunners never lost sight of  the prize as they swept the tournament resulting in the coveted championship title after a victory against the Knights in the finals 55-42.

Although wins and losses took place  throughout the week it came down to the kids learning and experiencing what to expect at the high school level of competition. “The excitement, anticipation, fans and pressure of performing on the court are part of the experience for players to expect as they move on to high school sports,” said Ulloa.

As expected the MVP and all tournament team were named at the conclusion of the championship game and will be watched by its followers as they play in their respective high school teams.

“Thank you for another great tournament, the kids had a great time and we will see you next year,” said Roadrunners head coach Erwin Villa.