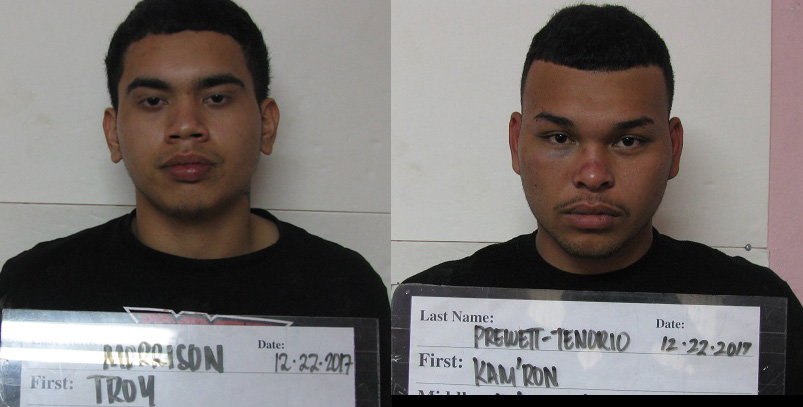 A high speed chase ensued throughout Agat and the suspects were eventually captured near Mt. Carmel Church.

Guam – A hot pursuit of two suspects who robbed a store at gunpoint in Agat last night ended in the suspects’ capture.

Guam Police Spokesman Sgt. Paul Tapao says the Bay Dollar Store in Agat was robbed at gunpoint just before midnight last night by two suspects who fled on foot towards the beach side of Route 2.

According to court documents, the two suspects entered the store yelling, “Money, Money, money,” before tossing a brown bag and instructing the store owner to hold the bag open as the robbers filled it with cash.

As police were responding to the robbery, the suspects were seen exiting the old Agat cemetery in a black Camaro. Police pursued the vehicle which at one point slammed into the driver’s side door of the marked police unit.

A high speed chase continued throughout Agat but eventually ended by the Mt. Carmel Church where the two suspects were apprehended. They have been identified as 20-year-old Troy Allen Aguon Morrison and 19-year-old Kam’ron Edward Prewett-Tenorio.

Both men were arrested for second degree robbery, use of a deadly weapon in the commission of a felony, reckless conduct, resisting arrest, eluding a police officer and guilt established by complicity. Tenorio was additionally arrested on charges of aggravated assault and assault on a police officer.

However, in Superior Court today, they were only charged with second degree robbery. Both men were booked and confined.