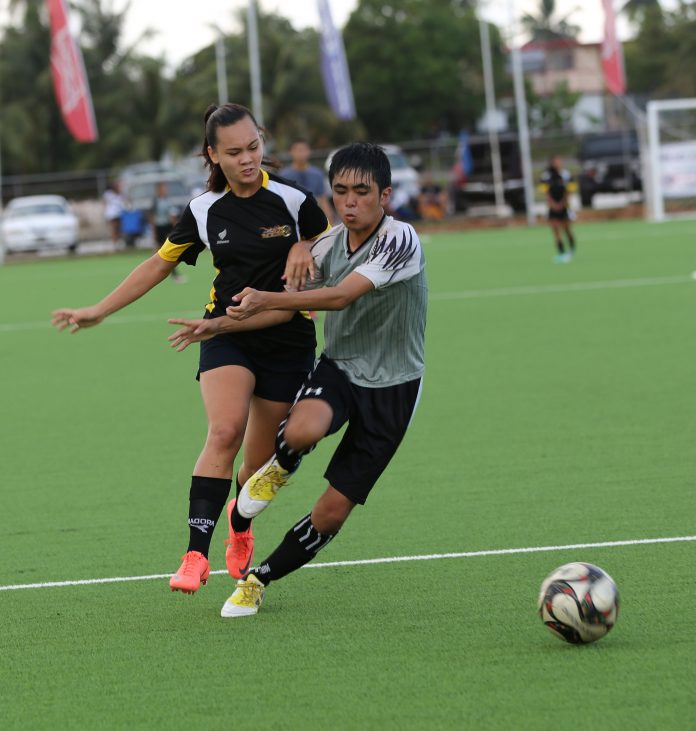 Harmon, Guam- The Southern Cobras overcame the odds to score three second-half goals in the team’s 3-2 victory over Quality Distributors Red in a Week 9 match of the U17 division of the Chevrolet Robbie Webber Youth Soccer League at the Guam Football Association National Training Center.

The Cobras, starting the match one-man down, took another hit midway through the first half when a soft red card forced the team to play with two less players against a full Quality team. Quality capitalized on the early advantage with Joshua Cepeda outrunning the Cobras defense on a counterattack play to earn the first goal of the contest for his team. Minutes later, a shot by Quality’s Anthony Dungca forced the Cobras to a two-goal deficit early on.

A few more Cobras players arrived later in the half, allowing coach Ashton Surber more flexibility in assigning positions for players on the field. Brandon Carbullido, who missed the opening kick off, took on the goalkeeper position replacing Seth Surber and the late arrival of Jason Miller added to the strength of the Cobras defense. Napu Topasna, who started at left back, moved into a striker position and scored a pair of goals in the second half to knot the match. Later, a Keith Surber goal capped the Cobras comeback.

[Photo: The Southern Cobras’ Ken Sekine tries to keep back the Southern Heat’s Colleen Naden from the ball during a U17 division match of the Chevrolet Robbie Webber Youth Soccer League at the Guam Football Association National Training Center. The Heat defeated the Cobras 3-1.]

Quality had chances for goals in the second half, including a pair of corner kicks in the closing minutes of the contest, but was unable to convert each time for the final score.

Though the Cobras were able to earn a much needed win earlier in the day, the team fell to the Southern Heat 3-1 in the late afternoon make up game from Week 6. The Heat’s Riley Jones Taijeron opened scoring early in the first half with a follow up shot on a botched corner kick play and the team managed to hold on to the slim 1-0 lead through to halftime.

Minutes into the second half, the Cobras toyed with the Heat’s defense to set up their goal. Russell Perez sent a pass to Keith Surber, who turned to pass the ball to brother Seth Surber on the left wing, shifting Heat defenders. Seth Surber passed the ball back to older brother Keith, who found space to score the game equalizer.

The Heat regained the lead when Alyssandra Cruz scored the eventual game winner off an assist from Colleen Naden in the 70th minute. Devin Quinata later scored an insurance goal six minutes later to help his team to the 3-1 win.

The day’s win and loss for the Cobras officially placed the team in fourth place in the division standings behind frontrunners ASC Islanders Betde, the Wolverines in second place and the third-place Wings Red. The Heat currently is in sixth place.

In other matches, the Wings Red defeated the Strykers 6-1. Agustin Choi scored a hat trick and Brian Tsujii added a brace for Wings Red. Andrea Odell scored the Wings Red’s other goal. The Strykers’ goal came on a Wings Red own goal.

The U17 division teams will play one more week of regular season matches. The top four teams after the end of the regular season will advance to the playoffs scheduled for May 25 to determine the division champions.