Guam – Every few seconds while on the field as a goalkeeper, Amia Johnston would turn around to look for her mother in the crowd of parents and families at the Guam Football Association National Training Center on opening day of the Chevrolet Robbie Webber Youth Soccer League 2013 spring season.

Later, when Johnston was moved to play in the field, it was all about running, kicking the ball and having fun with her Community First Dededo Soccer Club teammates, including her brother Tylor, in their match against the Lil’ Bombers in the U6 division.

“(Soccer) is a great extracurricular activity for them and they definitely enjoy it,” said Anika Johnston, mother of Amia and Tylor. “It also has helped them with school.

I’ve told them that in order to play soccer, they have to do well in school first and it has worked – they love the sport.”

The Johnston siblings, students at Machananao Elementary School, were just two of about a thousand other kids braving the intermittent rain showers to play soccer Saturday in the twice-yearly, ten-week long youth league. This season, over a dozen youth soccer clubs have entered teams in six age divisions – U6, U8, U10, U12, U14 and U17.

With the exception of the U17 teams that will begin their season later next month, all teams played their season-opening matches Saturday. 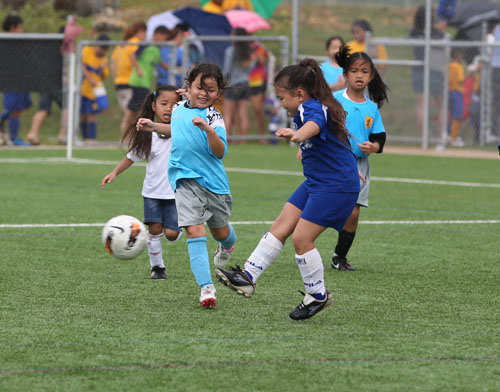 In the U14 division, the Strykers defeated Quality Distributors FC 3-1, the ASC Islanders shut out Tumon Soccer Club, and the Wings blanked the Sidekicks. In an exhibition match in the division, the U14 Girls National team training squad squeaked past Community First DSC 3-2.

The youth league continues Saturday beginning at 8 a.m. The U14 Boys National team training squad will continue to sell drinks during the day to raise funds for their trip to China in April to compete in the first-ever AFC U14 Championship Qualifier.