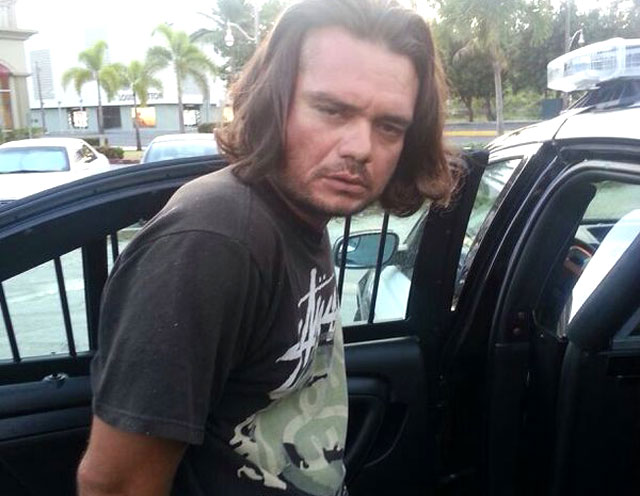 Guam – The Criminal Justice Strike Force has arrested 34 year old Robert Isaac Revels of Dededo in connection with a “strong armed” robbery that occured in Tumon this past January.

The robbery occured Janaury 24 on the ocean side side-walk of Pale San Vitores across from Tumon Sands Plaza.

In a release, GPD Spokesman Officer A.J. Balajadia says the suspect walked up to the victin and asked for 10-bucks. When the victim took out his wallet, the suspect “slapped the wallet out of the victims hands” causing it to fall on the ground. The suspect grabbed it and fled on foot.

The victim tried to stop him, but fell to the ground and sustained abrasions on his left and right elbows.

This morning at 2am, a witness to the incident recognized the suspect involved hanging around the old Club Hanna,  and that witness called police who then arrested Revels.

Officer Balajadia says Revels has now been booked and confined on a charge of “Robbery”.

TUMON – Thursday, April 10, 2014, 2:00am, a witness to a strong arm a robbery back in January of this year, recognized the suspect hanging around the old Club Hanna.  The witness contacted the police department and the suspect was turned over to the Criminal Justice Strike Force.

On Friday Morning of January 24, 2014, officers from the Tumon/Tamuning Precinct Command conducted an investigation regarding a Strong-arm Robbery, which occurred on the westbound sidewalk of Pale San Vitores Road, by Tumon Sands Plaza, Tumon. The victim reported that he was robbed by an unidentified man, attired in dark clothing, who stole his wallet from his hands and fled towards the DFS Galleria on foot.

The victim attempted to stop the unidentified man from stealing his wallet; however, in the process the victim fell to the ground, which caused him to sustain abrasions on his left and right elbow area.  The unidentified man grabbed the victims wallet and fled, on foot, towards the DFS Galleria.  The victim attempted to give chase, however was unable to keep up with the suspect.

The victim described the suspect as;
– Male
– Possibly Micronesian Decent
– Attired in Dark Pants and a Dark Hooded Sweater
– Dark Complexion
– Slim Build
– Black Long Hair, Tied in a Ponytail
– About 510 in height