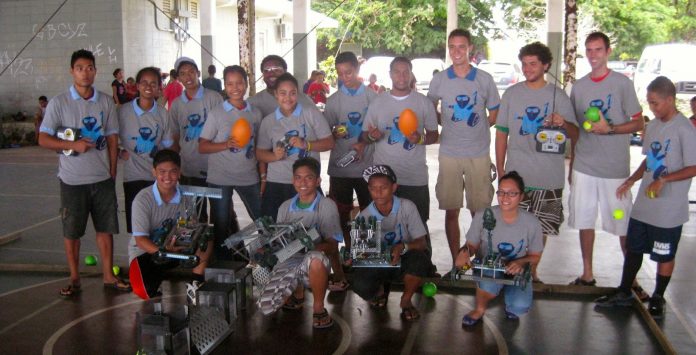 Yap, Micronesia – Two-dozen high school students in the Micronesian State of Yap showed off a year’s worth of work at a high stakes robotics public competition in Colonia earlier this month.

The pupils and their coaches from Yap Catholic High School and the Yap SDA School began working on the robots at the start of last school year. The teams met at least once a week throughout the spring semester and practiced with the robots every day within the final weeks before the annual Yap Robo-Day Exhibition. In total, four teams from the two schools competed at the public event.

[Student team pose with their robots]

In this year’s competitions, two robots faced off head-to-head on a playing field divided into two halves by an 8-inch high wall. Tennis balls, foam soccer balls, and foam footballs were scattered throughout the playing field. The objective of the game was to place as many balls as possible onto the other team’s side of the wall.  The winning team was the one that had the least number of balls on their side of the wall at the end of two 5-minute rounds.

“This was an impressive demonstration of applied science, technology, engineering, and mathematics instruction (STEM),” explained Neil Mellen of the US-based charity “Habele,” which equipped both schools with the materials to create the VEX robots. “This third annual Yapital Robo Day is a testament to hard work of students, the expertise of their classroom instructors, and the support of their engaged parents.” 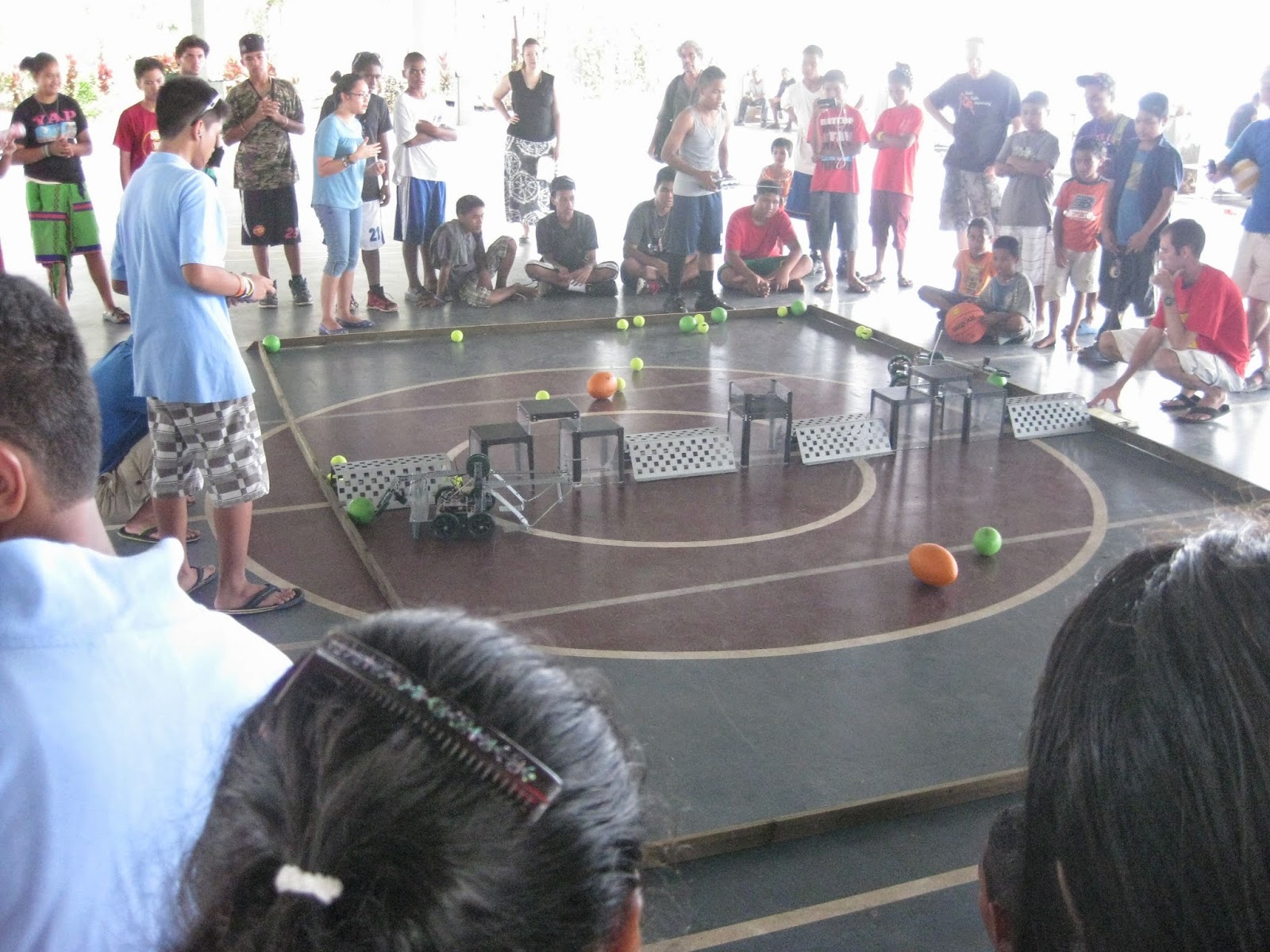 Each of the student crafted robot involved complex engineering.  Many different designs and prototypes were needed before the teams were satisfied with their final products. Two of the robots from Yap Catholic High employed unique claw designs that could grab and lift balls, as well as rams to knock tennis balls off of the dividing wall. The third robot also included a battering ram, and used an innovative two-wheel system to trap balls into a reservoir and then shoot them through holes in the wall. The intricate designs showed a great deal of understanding and creativity from the students, hone through trial and error over the course of two semesters.

The day of the public exhibition began with exciting volleyball and basketball competitions between YCHS and SDA. The sports teams had also been organized at the start of the school year and equipped by Habele with custom jerseys and professional grade balls. During the day, YCHS students sold local food and coconuts as a school fundraiser.  The day concluded with the robotics competition, which began with two of the YCHS robots competing against each other to demonstrate the rules of the game. In the final match, two sophomore drivers—Annalyn Tareg and Kobe Sacres—took home the State Championship title for YCHS for the third year in a row. 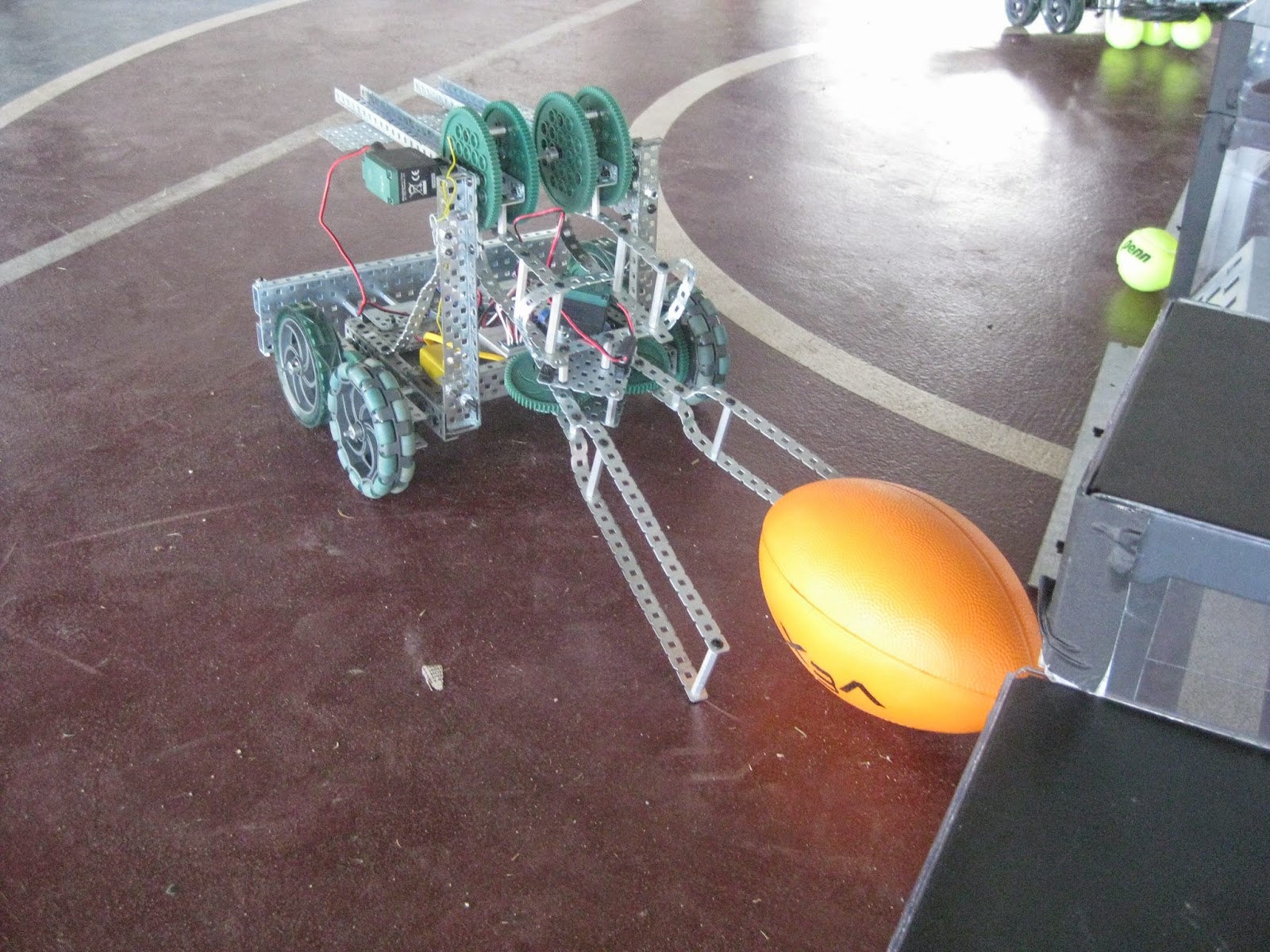