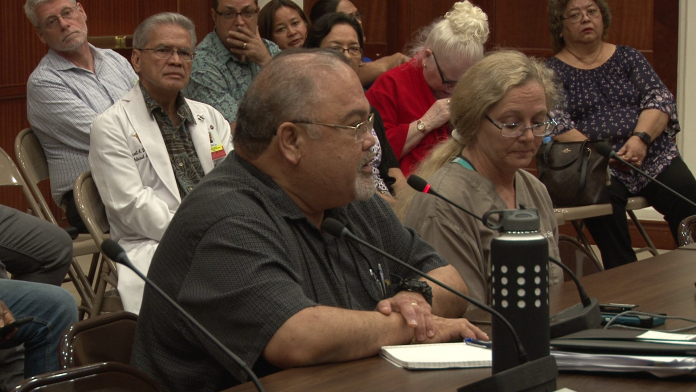 Guam – As the Guam Memorial Hospital continues to shroud itself in secrecy over a Centers for Medicare and Medicaid report, the Legislature is working feverishly to pry it out of their hands and release it to the public.

Health oversight Chairman Sen. Dennis Rodriguez has issued a subpoena to GMH Administrator PeterJohn Camacho, demanding copies of the CMS report and the corrective action plan Camacho submitted to CMS, warning that Camacho faces legislative contempt and potential prison time or a fine of $1,000 if he fails to abide by the directive by June 27.

PNC has obtained the CMS report in question and a letter from Certification and Enforcement Manager Paula Perse threatening to pull GMH’s provider agreement by October 3 if it fails to correct all the citations CMS found during a site visit back in April.

Without a provider agreement in place, GMH could lose about $30 million annually in funding for Medicare reimbursements.

The CMS report cites numerous violations, including one in which a patient required dialysis after a nurse administered IV treatment to the patient by mistake.

This report comes just five months after the leaked release of a Joint Commission report that threatened to revoke GMH’s accreditation for similar reasons.

Meanwhile, more are weighing in on the contentious GMH issue, including two democrat gubernatorial candidates.

Yesterday, former Governor Carl Gutierrez laid out his platform for his 2018 campaign, saying he would prioritize the needs of GMH if elected by declaring a state of emergency and abolishing the board to revert the hospital back into a line agency.

We have reached out to Camacho asking if he intends to comply with Sen. Rodriguez’s subpoena but he has not responded to our request for comment as of news time.

Meanwhile, Republican Sen. Fernando Esteves, who chided GMH leadership on Monday during an oversight hearing, is proposing to require GovGuam employees utilize public hospitals and clinics as their first line of healthcare services. In doing so, the vice chairman of the Committee on Health hopes to increase the number of patients visiting the hospital and therefore increase revenue.

In a letter to GMH, Department of Administration and Public Health, Sen. Esteves points out that mandating government employees to utilize public health agencies would help ensure revenue neutrality, saying, “if the hospital is good enough for the public, it is good enough for our employees who are funded by the public.”

The senator does, however, propose some limitations to this model like allowing GovGuam employees to seek healthcare-related services elsewhere if it treatment is not available at GMH or does not meet acceptable standards of care.

Senator Esteves has called for a work session to discuss his HMO proposal on June 28 at 10 am at the Guam Congress Building.

Governor Calvo, late this afternoon, appeared to heed the call of Leon Guerrero and lawmakers, writing to the GMH CEO, telling him, in part, “There are senators who are actively working to strip the hospital of this funding source and it is imperative that the legislature understand all aspects of the hospital’s management and financial challenges as outlined in the CMS report.”

However, the governor’s letter neither directs nor orders Camacho to actually release the report to the senators.