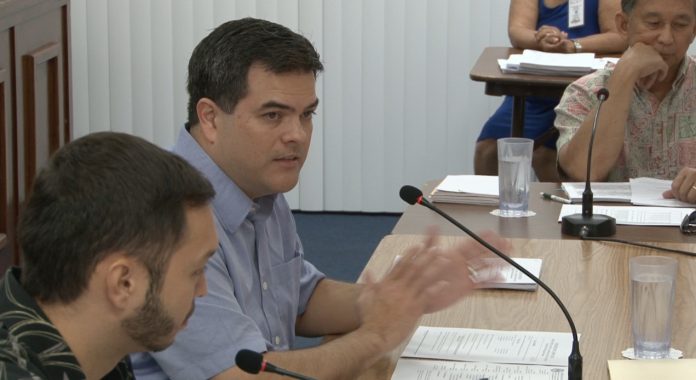 Senator Nerissa Underwood held a public meeting on bill 243 in the public hearing room on Wednesday.

Guam – The committee on rules voted to move four stalled bills out of Senator Mike San Nicolas’ committee into other committees. However Senator Nerissa Underwood’s Bill 243 which would allow senators to voluntary reduce their pay did not get the same treatment.

“So Mr. Chairman, these bills you are trying to re-refer from my committee were not referred to my committee in error, they are validly, or they were, I don’t know how this works at this point,” said San Nicolas.

While Rodriguez Jr’s bills may have found new homes, Sen. Nerissa Underwood’s bill 243, which allows elected officials to voluntarily reduce their pay and also happens to be the only bill that would reduce government spending , did not get moved despite being stuck in committee for just as long as the Rodriguez Jr.’s bills.

“I’m not questioning your authority. I need [clarification] as a freshman senator, the criteria and the basis for referring and re-referring. Especially since now bill 243 also has to do with the voluntary reduction of salaries for Senators and Governor and Lt. Governor,” said Underwood.

Respicio explained to underwood that since her bill deals specifically with the Gov. and Lt. Gov, only one committee is appropriate for her bill.

Meanwhile, when open discussion came, however, senator tony ada voiced concern with Senator Rodriguez Jr.’s informational hearing being called ‘illegal’ by a legislative staffer. Legal council, who was on hand clarified that she never wrote a memo saying the hearing was illegal.

In response, the staffer who called the hearing illegal, John Paul Manuel says in part “all the confusion is the result of conflicting public notices, and when clarification was sought, no clarification was provided.  My point was without proper 5 business day notice, an informational hearing is not a public hearing and thus to call it such would not be legally correct.    As a “public hearing” it did not meet the legal requirements of the open government law.”

“The problem is not with the legislative staffer, the problem is with everybody trying to figure out how to justify their actions. If we just do things right, we wouldn’t be in this mess,” said San Nicolas.

Senator Ada responded, “I think he’s absolutely right, we wouldn’t be in this mess if the standing rules had been vetted over before we started the 33rd Guam Legislature…thank you.”

San Nicolas has maintained that the reason he held the bills in his committee is because Gov Guam simply does not have the money for them.