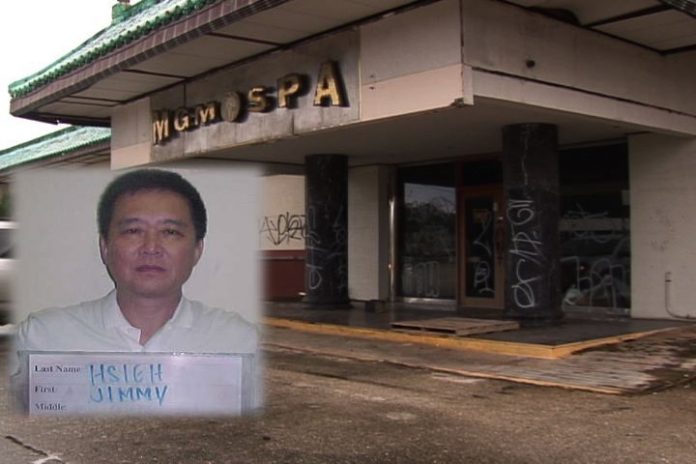 Guam – Billed as the mastermind behind the MGM Illegal gambling scheme, Jimmy Hsieh has been sentenced to 2 years in prison and more than $400-thousand dollars in forfeiture.// Three other defendants in the case were also sentenced in District Court.

Jimmy Hsieh and Pauline Perez were sentenced federal court this morning for the underground illegal gambling scheme they ran at the MGM Spa in Tamunin from January 2006 to December 2010. Both had entered plea deals. Perez was sentenced to one year probation.

Labeled the mastermind by the prosecution, Hsieh received the heftiest sentence so far of 2 years plus a forfeiture of more than $400k that was laundered through the gambling business.

The gambling scheme offered games of chance like poker and baccarat and took a percentage of the winnings.

His defense attorney, Howard Trapp, fiercely asked for a lesser sentence, however, pointing out that Hsieh had been nothing but cooperative with the court. And even when he was allowed to travel, he had always come back, whereas another defendant, Wai Kam Ho has not returned to Guam after he was allowed to travel without posting a bond to Taiwan. Ho’s culpability is just as heavy in the case, says Trapp, and the fact that he’s not present for sentencing, means Hsieh has the undue burden of taking the fall for him.

Hsieh was facing a sentencing range of 18 to 24 months. Trapp had asked Chief Judge Frances Tydingco-Gatewood for a variance and sentence Hsieh to probation instead. “The court owes him that,” he pointed out.

He says Hsieh has learned his lesson and to think that he’d return to the gambling business if he doesn’t serve time is ridiculous.

Assistant US Attorney Belinda Alcantara, however, argued that illegal gambling and money laundering are serious crimes and harmful to the Guam economy. She noted that it targeted a particularly vulnerable part of the community and affects crime rates. “Those convicted of economic crimes like gambling should not be able to avoid incarceration,” she argued.

As of this afternoon, the US Attorneys Office says William Perez and Pau’s sentencing hearing was still ongoing.