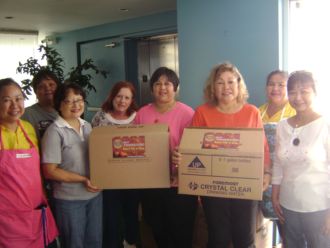 Guam – The Rotary Club of Guam is pleased to announce its support of a number of charitable endeavors.

The 2010 Christmas Drop effort from Andersen Air Force Base drew support from the Rotary clubs on-island and elsewhere.

The Rotary Club of Tokyo Tachikawa also contributed the sales proceeds of its book about the Christmas Drop to purchase parachutes for the drop.

In addition, the Rotary Club of Guam ran a Thanksgiving Turkey Drive for villages of the Mayors Council of Guam and others on Nov. 24, donating meal sets for about 1,000 people. Aside from club member donations, the drive was supported by Home Depot, Glimpses of Guam, Foremost Foods, Hawaii Intercontinental, Sharp Business Systems and Sea Grill.

Other support of the Rotary Club of Guam so far in the 2010-2011 year includes the Sugar Plum initiative, which received $1,000 from the club.