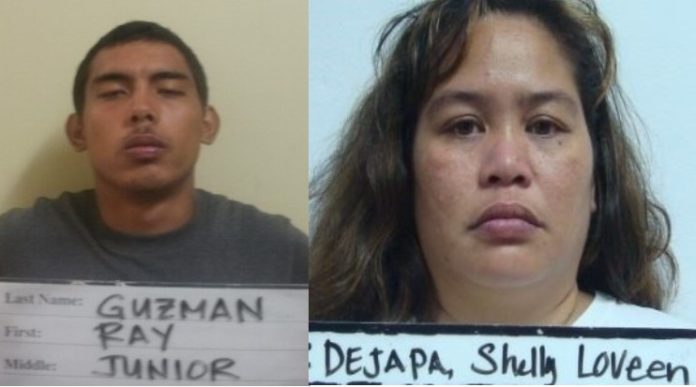 A routine police patrol in Santa Rita Friday morning ended with the arrest of a man and a woman on drug and gun allegations.

According to a release from Guam Police spokesman Sgt. Paul Tapao officers from the Southern Precinct Command approached a man seated in the front driver’s seat of a sliver sedan parked behind the Sumay Pub and Grill about 8:30 a.m.  A man was seated in the back seat, and a woman was sitting in the back.

The woman was later identified as 41 Shelly Loveen Dejapa. The man was 28-year-old Ray Junior Guzman.

A check of the Virtual Computerized Criminal History revealed that Guzman was wanted for an “open violation of (a) court order.”

Officers saw Guzman reaching under the front passenger seat and instructed him “numerous times” to place his hands on the vehicle dash board.  He was then placed under arrest for the open violation case.

Under the front seat of the vehicle police found a .25 caliber pistol and a second firearm, the type of which is not described in Sgt. Tapao’s release.

Dejapa was booked and confined on a charge of Possession of a Schedule II Control Substance.

Guzman was booked and confined on the following allegations: