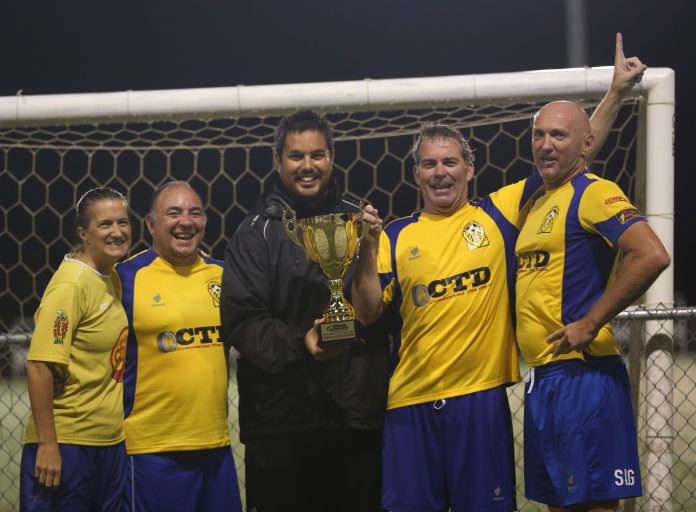 Harmon, Guam – With Big Blue winning its match against IT&E/IP&E in the early game of the final week of the 2013 Bud Light Co-Ed Masters Soccer League, the Rovers FC needed nothing less than a win against Hyundai Family FC in the late game to win the league’s championship title.

Ian Lawton’s hat trick was more than enough to lead the Rovers to the championship title as the team earned a 3-0 shut out victory over Hyundai at the Guam Football Association National Training Center.

Both the Rovers FC and Big Blue completed the season with identical 6-2 win-loss records, however, based on league rules, the Rovers finished above Big Blue based on head-to-head points. The Rovers defeated Big Blue twice during the season for the second-place team’s only two losses. The Paintco Strykers and Hyundai Family FC were the only teams that managed to defeat the Rovers earlier in the season.

Richard Hawes, Pedro Walls, Cheri Stewart and Andrew Miller accepted the championship trophy on behalf of the Rovers in an awards ceremony following the Rovers-Hyundai match.

In the Big Blue-IT&E/IP&E match, Noel Casilao opened scoring with a header-for-goal from a Bedia cross in the 31st minute.

Five minutes into the second half, Bedia sent a pass across the goal to Yvonne San Nicolas, drawing out IT&E/IP&E keeper Rick Tyquiengco. Instead of attempting a shot, San Nicolas back-kicked the ball to teammate Sung Chan Hong, charging toward the goal on the left side. Hong finished the play to double his team’s score in the 50th minute. Big Blue added another goal seven minutes later on an IT&E/IP&E own goal from a corner kick play.