Guam – The Rovers DI overturned a 1-0 first-half deficit with three second-half goals against the Paintco Strykers to stay in the top position of the Budweiser Soccer League through Week 8 at the Guam Football Association National Training Center.

The Rovers DI’s Jason Cunliffe leveled the match in the 50th minute, sprinting past the last line of Strykers defenders and sending his shot up and over Strykers goalkeeper Julius Campos, who made the decision to slide on the play.

Eleven minutes later, Eric Redona scored the eventual game winner from the right side, connecting on a pass across the goal. Cunliffe sealed the win moments later with another goal for the 3-1 score. Hiro Asoshina scored the Strykers’ lone goal in the 16th minute.

[The Paintco Strykers’ Hiro Asoshina controls the ball in the midfield in a Week 8 Division I match of the Budweiser Soccer League against the Rovers DI at the Guam Football Association National Training Center. The Rovers DI defeated the Strykers 3-1]

In other Week 8 Division I matches, Quality Distributors’ Scott Leon Guerrero whipped his free kick around Guam Shipyard’s defensive wall into the goal in the 90th minute to force a 3-3 draw. Phillip Ogo scored both of Quality’s other goals. Kenneth Karosich scored twice for Shipyard and Jared Quichocho scored his team’s other goal.

In Week 8 Division II matches, the Sidekicks continue on undefeated with a 11-0 shut out of Xtra Krispy FC. Shawn Spindel finished with a double hat trick and teammates Carlo Unpingco, Adrian Atalig, Michael Sgro, Tomas Calvo and Jerrick Cruz scored one each for the winning team. 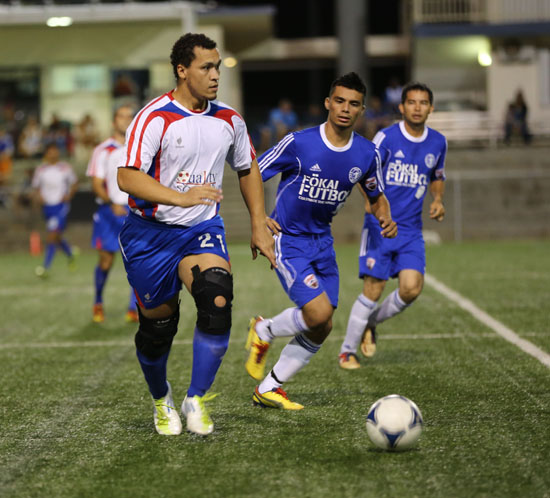 [Guam Shipyard’s Donald Weakley breaks away from Quality Distributors’ Kaito Inoue to stay in possession of the ball in a Week 8 Division I match of the Budweiser Soccer League at the Guam Football Association National Training Center. Quality forced Shipyard to a 3-3 draw.]

The Ambassadors picked up a 6-1 win over the Pago Bay Disasters. Jeremy Boldt finished with a hat trick for the Ambassadors and Jason Flores, Ezra Valdes, and Nicholas Kirchner also scored. Jathan Muna-Barnes scored the Disasters’ lone goal.

The Rovers DII picked up a victory via forfeit over FC Beercelona. 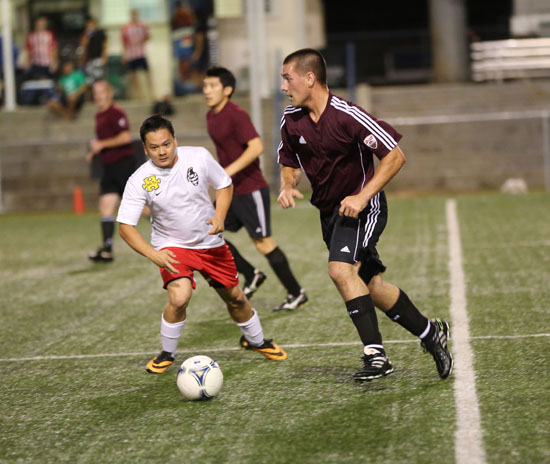 [The Ambassadors’ Nicholas Kirchner carries the ball through the midfield as the Pago Bay Disasters’ Ray Blas stays close on defense in a Week 8 Division II match of the Budweiser Soccer League at the Guam Football Association National Training Center. The Ambassadors defeated the Disasters 6-1.]

In the Masters Division, IT&E/IP&E slipped past the Rovers Masters 1-0 with a goal from Kevin Elwell in the 70th minute.