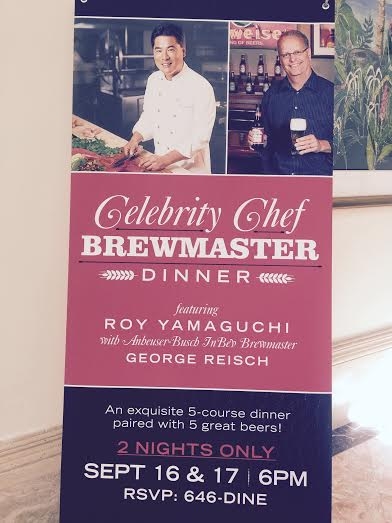 Fifth generation Anheuser-Busch Brewmaster George Reisch will be teaching diners about the four pillars of good beer. One of those pillars is the proper way to pour beer into a glass. The best way is to pour the beer directly into the middle of the glass not along the sides the way most people do it. The reason is because you actually want to have the bubbles also known as head on the beer. Why? Well for one it brings out the aroma and flavor in the beer but also it will prevent beer bloat. Reisch used a napkin to show what happens when food goes into the stomach filled with beer that has already foamed up versus food that goes into the stomach filled with beer that hasn’t been poured properly. If the beer hasn’t been poured properly Reisch says you can get beer bloat when eating. However if poured properly Reisch says beer is the perfect complement for food. “If you come to the dinner tonight you’re going to hear a lot about from Roy about the stories of the food the farmers why he chose different things. You’re going to hear from me about the beer the ingredients we use the yeast we use the history of that beer some interesting stories then you’re going to have beautiful glassware so you can see how to present the beer. Then at the end of the day you’ll do this marriage in your mouth of the beer and the food and you’ll see that separate they are great but together they are better,” said Reisch.