Today is Day One of the hunger strike organized by Russian asylum seekers and it could go on for days until the government responds.

Desperate for the U.S. government to hear their pleas, a group of Russian asylum seekers are in front of Adelup holding a hunger strike.

As they want to voice their right to move freely within the United States, the Russian asylum-seekers cited article Article 26 of the UN’s International Convention on the Status of Refugees which says:

“Each Contracting State shall accord to refugees lawfully in its territory the right to choose their place of residence and to move freely within its territory subject to any regulations applicable to aliens generally in the same circumstances.”

Asylum seekers have different reasons for fleeing Russia. Some fled to Guam for political reasons, others for their religious affiliation and gender identity.

Kate and Andrei are just two of the more than 200 Russians who are on Guam seeking asylum in the United States.

They arrived in Guam two years ago. They are part of the group that have been protesting for several months now and four of them started their hunger strike on Monday, March 1.

Andrei and Kate, asylum seekers, said: “We want our right to freely move within the United States. We plan to do this hunger strike until the problem is solved …until they take us or we are forced to go.”

According to the protesters, they have been sending letters to Gov. Lou Leon Guerrero and Congressman Michael San Nicolas, hoping to get their attention and action on the matter.

On Monday, the asylum seekers issued another open letter demanding that they be allowed to execute the right to freely move within the USA by letting them take a direct flight from Guam to Honolulu.

In case of harm to the health or life of the strikers, they are holding the CBP accountable, which they say is blocking their movement.

“Yes, it is a federal issue. But we believe that local governments can do their part ..they have power…they have connections…. They can give a call to someone in the United States mainland… they can do something. But all we see now is that they just ignore us. They pretend like there is no problem with Russian asylum seekers here,” Kate said.

Andrei, speaking in Russian, said they can at least bring attention to this problem. For example, the Congressman can raise this issue.”

Initially, the group were camped at the lawn of the Governor’s complex but were asked to move to the roadside by Park Patrol Officers.

According to the protesters, while they were not barred from protesting, the patrol officers demanded a permit from the group. 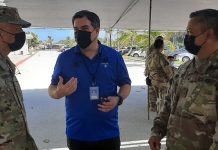