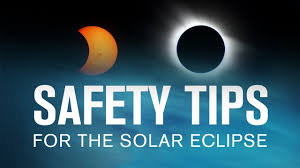 According to Middlebrooke, just because the sun will be partially blocked does not mean the UV rays which can cause damage to the eyes will be lessened.

He tells those who want to watch the annular eclipse set to occur this afternoon to practice safety and use protective glasses or a method to indirectly view the sun like a pinhole reflection.

Island residents will be treated to a full view of the “Ring of Fire” eclipse and so will our brothers and sisters in Rota. But for a majority of the world, they will only be able to see a partial eclipse.

According to Middlebrooke, if you plan on capturing the image of the eclipse on your camera, use a filter.

Also, do not try to view the eclipse through a telescope or binoculars as the sun’s rays could start a fire through the magnification of the lenses.

The last annular eclipse of this decade will occur this afternoon at around 4:55. The spectacular event, according to the National Weather Service, will last roughly three minutes.

The annular eclipse will end as the sun sets, and, as a bonus Middlebrook says that if the skies are clear island residents may also see the planet Venus in the sky.