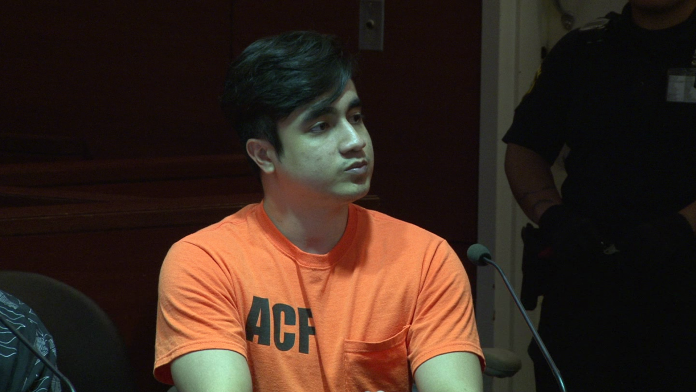 Guam – “I refuse to let this define my existence,” stated killer of two, Joseph Sagdal who will spend nine years in jail. After pleading guilty by accepting a sweetheart plea deal from the government, murder charges are reduced to manslaughter, leaving a widow and mother of two heartbroken over the sentencing.

“I am not satisfied with the plea. I wanted a longer jail time, but that was two lives he left me with two kids. I don’t have anything to say I don’t want to take the stand or anything because everything that I am going to say is negative,” states victim A.V. Mwarecheong’s wife Myrose.

Visibly displeased, Myrose believes that justice was not served as Joseph Sagdal’s plea agreement dismissed the charges of aggravated murder, and murder.

Despite having killed AV and Brokey Thomaso, what can only be described as a sweet heart plea deal only convicts Sagdal of manslaughter as a first degree felony in the reckless death of AV. And for the first time since his arrest one year ago Sagdal spoke.

“The events that occurred that night, in my words is that pretty much that there was a little bit of an altercation between me and the four gentlemen that were in the car and after that I used my weapon against them and fired. I ended up taking the two lives,” admits Sagdal.

“Can you explain to the court how you believe that was reckless?” questions Judge Maria Cenzon.

“Reckless because I shot my gun while I was in my car and just basically fired,” he responds.

Judge Cenzon questioned whether Sagdal understood the consequences at the time he fired his weapon.

“At the time I could honestly say that I didn’t up until the event was over. That was when it all pretty much sank in,” responded Sagdal.

But Sagdal was not an ordinary person firing a gun, he was trained in the use of weapons and was also a certified shooting instructor. The consequences of his actions as pointed out by Judge Cenzon and the government, is something he should have known.

Sagdal was sentenced to 15 years with all but 9 years and 3 months suspended with credit for time served.

With his sentence handed down, Sagdal addressed the court for a second time.

“Your honor, the court, sorry about this. All my life I have tried to be a good man, to be an honest man. I have tried to be good to people that I meet. My only intention in coming to that place was to repay a kindness that someone showed me when I needed it most. Not to cause pain to anybody. The best teachings in life are learned from the worst experiences. These are lessons that I will take with me for the rest of my life. Their deaths weigh heavily on my soul. I will serve time but I refuse to let this define my existence. I will never stop striving to be a good man. I will continue to work towards my goals. In darkness there will always be light,” he said.

While Sagdal’s family, according to his attorney Clyde Lemmons, is happy with the deal, AV’s family was filled with emotion and chose not to address the court. His wife, however, was not silent in airing her disappointment, speaking to reporters outside the courtroom.

“He didn’t even say he’s sorry, at least say sorry. I wanted to hear that. I don’t know if he can provide everything my kids want need since he took their father, but I have nothing else to say.

PNC: “Do you think that his apology in court was disingenuous, that it wasn’t sincere?”

“To me that wasn’t sincere. I didn’t even hear I am sorry. I know it was wrong. One gun shot is good enough, not good but more than one that’s a kill shot. I don’t know whats going on but that’s not justice to me. That’s not justice,” says Myrose.

Myrose is now left to raise their two young children who to this day continue to ask for their father to come home.

“They are still asking for their dad. We don’t know what to say. I don’t think they understand that he is gone,” she says.

While Sagdal was convicted for AV’s death and the charges dismissed in the death of Thomas, it begs the question why would the government offer such a deal? Is it because the government would be going up against two prominent attorneys, David Lujan and Clyde Lemons? Or is it because there was doubt in being able to secure a conviction?

“He’s going to get out. He’s going to be in his thirties. He will be a young man. Had we gone to trial, we might have won and we might have lost and he would have spent the rest of his life in prison so that’s the trade off,” explains Lemons. “Were there some evidentiary issues that prompted the government to offer this plea agreement? Well they had some problems and they had two pretty good lawyers to go up against. I am sure all of that factored into it.”

A restitution hearing has been set for February.