Throughout the morning, teams of workers, dressed to battle the morning heat, painted buildings and classrooms, water-blasted sidewalks of debris and manicured the playgrounds.

“The school needed a little help getting ready for the next school year and we try to help the community whenever we can,” said Hospitalman 2nd Class Michael Gee of CRG-1 Det. Guam. “Traditionally, the Navy tries to improve relations with the community and I feel like we have made a difference since I have been here and that’s important to leave an impression – to leave the place better than when we found it.”

Gee said he has been on Guam for nearly 16 months and tries to lend his support to community service projects at least once a month. On a personal note, he said he takes pride in knowing that he helped foster positive relations with the community.

“We are helping the kids take pride and ownership in their school and community because for many outside of the school, they do not have that,” said Principal Dexter Fullo.

Grateful for the camaraderie between the residents and Sailors, Fullo said the military has been a shining example, taking the lead in such efforts. He feels that the community pride created could help prevent future vandalism and the new paint could permanently cover the graffiti of the past.

“What we teach the children is not just in the classroom, it is in the community. When we have their parents here and well respected people from the military here, it lets the kids know this work is worth the effort.”

Personnel Specialist 1st Class (SW) John Rojas, of CRG-1 Det. Guam and a native of the island, said that he has personally witnessed the encouraging impact the military has had in the local community.

“The military being here is a positive thing and Guam has come a long way with the help of the military,” he said. “It’s about creating a one-on-one relationship with the community.” 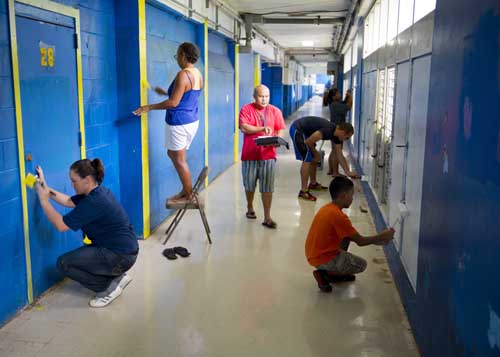 Fullo said a large majority of children will not pursue college after finishing high school; however, many will seek enlistment in the Armed Services.

“It is their dream so when they see military people giving back, it inspires them,” he said. “When they see this, they say to themselves, ‘This is something we can do.’”

He said he hopes such inspirational leadership will continue in the future since it is the children that truly benefit from interacting with the service members.