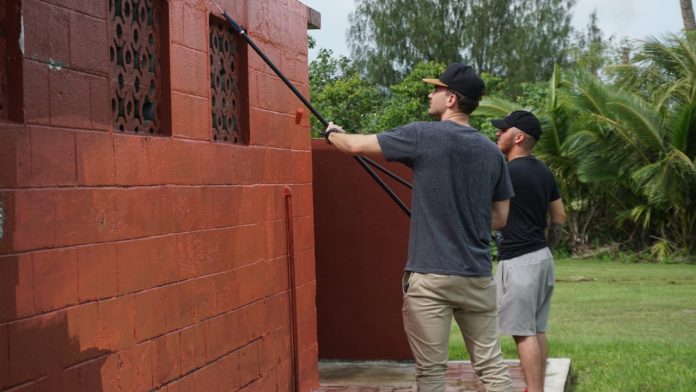 Earlier this week, the Boxer Amphibious Ready Group and the 11th Marine Expeditionary Unit arrived at Apra Harbor, bringing 3,300 Marines and 1,900 Sailors to Guam who will stay on the island for the next few days as their ships are resupplied and undergo maintenance.

Instead of lounging around to unwind after six months at sea, several sailors from the Boxer ARG chose to spend a few hours serving the island by painting the facilities and picking up trash at the Pedro Santos Park in Piti.

For many of them, it was their first time to be on Guam.

Silvestre Baniqued said: “As soon as we pulled into port, I saw the water, the little clouds in the sky, but mostly sun…which is what I was looking forward to the most. Lots of green, too,” he said.

As for others, they appreciated the hospitality that the island had to offer.

Beau Cline added: “People are really welcoming, really friendly. So this is our way of giving back.”

While these service members will be on island only for the next days, they aim to make the most out of their stay.

Steven Schwarz, U.S. Navy Chaplain, said: “We’re very excited to be here. Not only do we seek community relations as an investment, but while we’re here, Guam is our home. And while we’re home, we wanna take care of the home.”

Sailors from the Boxer ARG also volunteered at Island Girl Power to clear the park trail and plant trees.