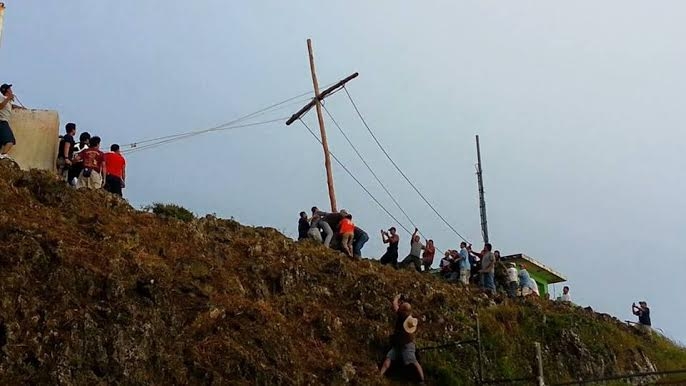 Parishioners from all walks of life took part in the procession, which many described as a time for family, friends, and to remember Jesus’s sacrifice.

A blessing at the summit — the island’s faithful in an long running tradition trekked to Saipan’s highest point, Mt. Tapochau, in recognition of Good Friday. San Vicente Parish led this year’s procession and carried the 30-foot long iron wood cross on a meandering dirt road to the top after the initial blessing. “This is something unique on Saipan. This is something important because the cross is the meeting point between God and man. And I think it is very appropriate on Good Friday to do this,” said Father Jason Granado of the San Vicente Parish.

Parishioners from all walks of life took part in the procession, which many described as a time for family, friends, and to remember Jesus’s sacrifice. Some residents woke up as early as 3 a.m. to complete the walk. “I just want to be a part of the community on this day. It is a pious occasion and commemorate what we are here for, which is the death and sacrifice of Jesus Christ,” said Dennis Chan. “It is only once a year where we do this. When we put all the burdens that we go through away and forget about them and think about the sacrifice that Jesus made,” said parishioner Luis John Castro.

Shortly after 7 a.m. the cross was hoisted at the summit by the faithfully devoted as the run rose over the mountaintop.

One of the youngest cross bearers, a 15 year old, told PNC that it was his first time to participate on the trek and decided to carry the cross to fulfill what he said is a Catholic obligation.

“I feel that you have to suffer this Holy Week to really accept Easter and have new life when it comes. I feel like that is my calling,” said parishioner Collin Michael.

The congregation will meet at the summit again on Sunday for the Easter sunrise mass.