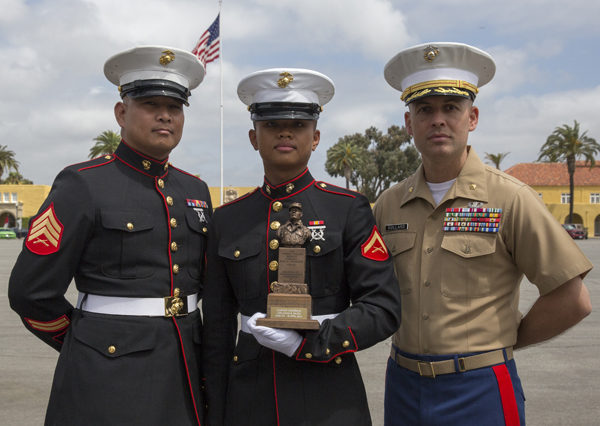 To be exact, more than 21,000 young men go through the grueling 13-weeks of training in Southern California to earn this prestigious title. At the end of those 13 weeks, a graduation ceremony is held to display the monumental transformation from civilian to Marine.

These men come from all around the western part of the United States, but unknown to most, recruits are shipped from U.S. territories such as Guam and Saipan as well. While the quantity of men and women recruited out of Recruiting Substation Guam is small, the quality shipped to recruit training is high. This high standard was exposed during the recent graduation where Lance Cpl. Nicko S. Salem, a native of Saipan recruited from RSS Guam, earned the title of company honor graduate for Company M aboard MCRD San Diego April 25.

[U.S. Marine Corps Lance Cpl. Nicko Salem, a native of Saipan, earns the title of company honorman for Company M at Marine Corps Recruit Depot San Diego, on April 25, 2014. Salem excelled over his peers in various tests of physical and mental challenges that he faced during boot camp.]

“When I first met him, I knew he was going to be a good Marine,” said Comea. “He always actively supported his parents, even when they were out of work. He would manage his busy schedule to care for them.”

Salem said it was his family who motivated him to be successful throughout recruit training.

“My motivation came from my family back home,” said Salem. “I come from a very small island which doesn’t have much to offer, and I wanted to make the people back home proud. Something like this is a huge deal for us.”

Although Salem’s motivation came from family and friends, he credits Comea for always being there for him and preparing him for the tough road he was to embark upon.

“My recruiter helped me a lot with physical training,” said Salem. “He was one of those people who motivated me to do well. He’s about to get out of the Marine Corps, and he told me it would be great to see me become honor graduate before the day came.”

Maj. James Dollard, commanding officer of RS Orange County, said he also saw Salem’s potential during one of his visits to RSS Guam.

“He stood out, as all the poolees in Saipan do,” said Dollard. “The standard out there is 40 dead hang pull ups, and they achieve it. Salem beat me in one of the initial strength test runs, which is only the second time a poolee beat me.”

From the time Dollard met Salem, he told Salem he would attend his graduation ceremony because of what he saw in him.

“He is an absolute phenomenal guy,” said Dollard. “He said he was hungry, he said he was going to do it before he did it, and he just came out here and performed.”

Salem’s next goal is to get an education using the benefits afforded to him by the Marine Corps.

“I want to make it a career,” said Salem. “I want to use the skills, knowledge and discipline instilled in me to do great things in the Marine Corps.”