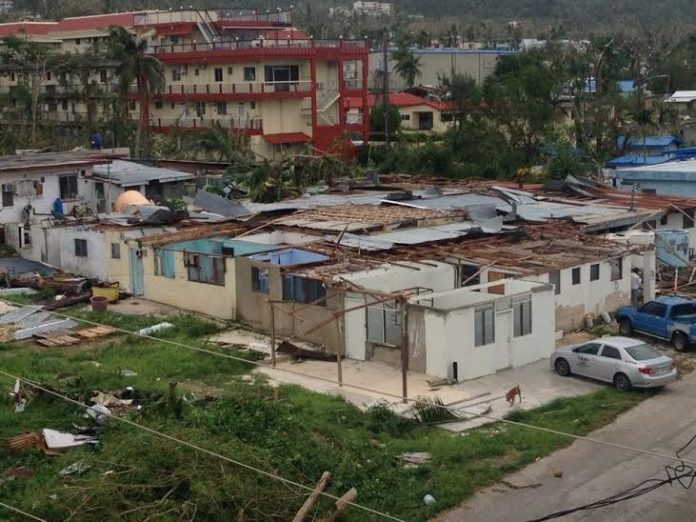 Various efforts have been launched on Guam to help collect donations for residents in Saipan.

Saipan – Saipan residents are still suffering from the aftermath of Typhoon Soudelor.

CNMI Acting Governor Ralph Torres issued a Declaration of Major Disaster and Significant Emergency for Saipan as numerous homes are damaged, if not destroyed, and the island is still without power and water.
Commonwealth Utilities Corporation spokesman Brad Ruszala says, “We’re trying to attack that before it turns into a public health situation. I’m a regular resident, a father. Just knowing that you guys are there is huge. We’re relying on ourselves and everything. Some people lost everything.”
Earlier this afternoon, on K57’s Four Hour Fill with Phil Leon Guerrero, Ruszala said they’re working hard to get at least the water back up and running for residents.
Ruszala says, “We met with representatives from the U.S. Army Corps of Engineers and the U.S. Department of Health and Human Services. They’re going to be our liaison with FEMA. FEMA has told us they’ve got 70 generators on Guam. Question is which ones do we need, how big do we need them and where do we need them? They don’t have the big generators there that aren’t going to power our power plant, they have the ones that will help more essential services like our wells, water wells, and our water pumps so we can get water for our people.”
According to a release from the office of CNMI Congressman Greg Kilili Sablan, right now, food, water, cots, small generators, and other emergency supplies are being shipped in from Hawaii and Guam. The Army Corps is also ready to provide larger generators for the hospital and wastewater treatment facility if needed. Ruszala said aside from power and water, another issue is the shortage of fuel.
He said, “Our streets are getting opened. It doesn’t look clean yet but it’s starting to get back to normal as far as transportation goes. Trying to get fuel here is a big challenge right now. There’s lines at least a mile long at the three Shell stations currently open. They’re limiting purchased to $20 per person.”
Congressman Sablan said he was shaken by the devastation.
Sablan said the Federal Emergency Management Agency has deployed an Incident Management Assistance Team to Saipan and will be making a preliminary damage assessment. The next step, once the damage assessment is ready, would be for the Acting Governor to make a formal request for federal assistance. FEMA reviews this request before sending its recommendation to the President.
Sablan urges residents to report and document damage to the Mayor’s Office or local officials, so that information can be added to the assessment.

National Weather Service Forecaster Mike Middlebrook tells PNC that Saipan was likely hit by winds in excess of 100 miles per hour however it’s not clear exactly how powerful the winds were because the wind measuring equipment called an anemometer broke. Before it broke the equipment recorded 91 mile per hour winds.

If you want to help our brothers and sisters in Saipan, several boot drives were launched to raise funds for the island’s recovery efforts. Here’s how you can help!

Governor Calvo and Lt Gov Tenorio are taking the lead to organize boot drives for Saipan.

The boot drives will be held the next two Friday’s, August 7 and 14. Volunteers will be at the below intersections from 4 p.m. to 5:30 p.m.:

– Micronesia Mall/Route 16/Route 1
– Chief Quipuha/Paseo Loop Intersection
– ITC Intersection
– Sumay/Route 1/Route 2
– Airport Road Intersection
Bank of Guam also established an account for contributions to help the Saipan and Tinian communities. President and Chief Executive Officer Lou Leon Guerrero says they will send their support for a speedy recovery. She says the bank will be providing direct assistance to all Bank of Guam employees in those branches. Contributions may be made at all Bank of Guam branches, with the notation that the funds should go to the “Soudelor Aid” account.
The Office of Senator Michael F.Q. San Nicolas is also accepting donations for victims of Typhoon Souleder. Donations of clothing, household goods, nonperishable food items are being accepted at his office located in the DNA Building Suite 407 in Hagatna. If you are unable to drop off your donation to the office, please call 472-6453 and we can pick up your donation.
Ruszala says, “You know we live in the islands and we have a lot of pride. We like to think we can do everything ourselves but we’re really thankful for your help.”
[Photo courtesy: CNMI Facebook Page]