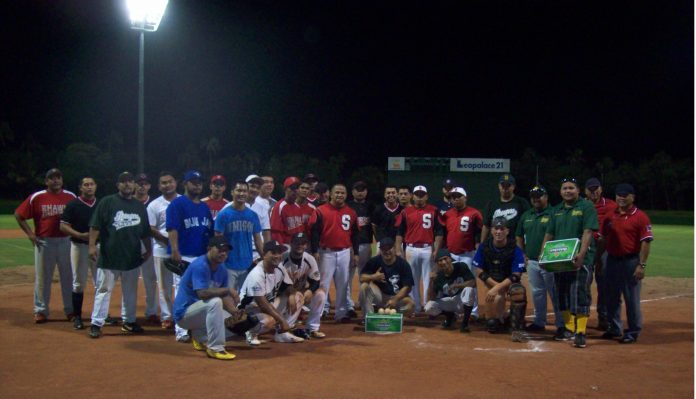 Manenngon, Guam – Jim Beam Amateur Baseball All Star Game kicked off Sunday 4pm at Leo Palace with the IP&E Homerun Derby.  With little to no wind on a beautiful Sunday afternoon the spacious confines of Leo Palace Baseball Stadium proved a formidable opponent with all 16 participants coming up short except for two.  Austin McKay and Kagan Rabago would battle it out with McKay taking the IP&E Homerun Derby title with two homeruns to Rabago’s one.  However Rabago would turn in the longest blast of the day into the coconut trees to deep left field.

Although just a friendly contest before the playoffs kick off Saturday June 8 the players came out with intensity and swinging the bat.  The Gun’s Jude Quichocho would get the call to start for Team Proa and the Ranger’s Johnathan Duenas would start on the hill for Team Ifit.

[Photo: All Star players in the Jim Bean Amateur Baseball All Star game.]

Team Ifit would come out swinging the bats with Shaun Santos singling and Jarrett Barcinas driving him in with a double.  Chris Genera and Davey Pecha would follow with back to back singles to give Team Ifit an early 3-0 lead.

Team Proa would answer in the bottom of the 1st with rbi singles from Boomer Sioco, Darren Pablo, Hank Salas and Justin Candoleta sparking a five run 1st inning and giving Proa a 5-3 lead.

Proa would add to the score in the 4th inning extending their lead to 8-3.  Kevin Dirige would start things off with a walk and Darren Pablo would single and both would come around to score on a double by Pete Castro.  Castro would come in to score on a rbi single from Hank Salas.

Team Ifit would scrape a run across in the top of the 5th inning to cut the lead to 8-4.  Vic Villagomez would single and score on a throwing error.

Proa would stretch the lead in the bottom of the 6th inng with Hank Salas again starting things with a long double to left center and Justin Candoleta walking.  HR Derby champ Austin McKay would then hit the left field gap for a two rbi triple.  McKay would come into score to give Proa a commanding 11-4 lead.

The Proa bullpen of Mark Parks, Jay Cing and Hank Salas were on their game shutting down Ifit over the last 6 innings allowing no earned runs and striking out seven batters to lead hold on for the 11-4 win.

Hank Salas picked up the Jim Beam All Star Game MVP going 3 for 4 with a double, two runs and two rbi and 1 inning of scoreless work on the mound to close out the 7th inning.  Mark Parks picks up the win going two innings and striking out four.