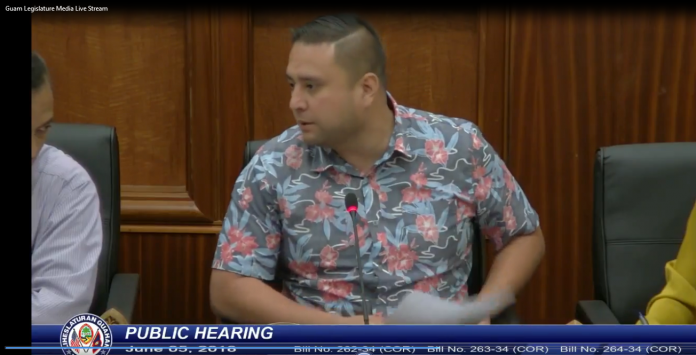 Guam—Another vote down and none to go! That’s the hope among senators aiming to repeal the just-enacted sales tax, following a public hearing last night. A coalition of the willing continues to mount votes for the rollback’s passage through the legislature, and then for an override of an expected veto from Adelup.

Sen. Fernando Esteves (R), whose deciding vote imposed a sales tax on Guam, effective Oct. 1st, now says he’ll vote to repeal it. At the start of what would be an hours-long debate over a number of bills to either repeal the sales tax entirely or create certain exemptions, Esteves announced to Tax Committee Chairman Joe San Agustin (D) that the Dept. of Revenue and Taxation’s failure to respond to his repeated requests for data and cooperation is the cause of his reversal.

“I would like it to be known that we have not received any word, any correspondence, regardless of numerous attempts, and letters sent, hand-delivered, to the Department of Revenue and Taxation,” Esteves said.

“And, with that, Mr. Chairman, I make the request that I pull Bill 263-34 from consideration now and further, and would like the record to reflect that I am in full support of a repeal of the sales tax.”

Although Esteves actually wants a sales tax to replace the gross receipts tax, he claims he cannot build a case for sound sales tax legislation without an understanding of how exemptions would impact overall collections and dedicated revenue goals. Esteves’ announcement was welcomed by several of those in attendance, but not by healthcare professionals who say Guam Memorial Hospital remains in dire need of new funding to the tune of $30 million annually. PNC has learned that Guam Memorial Hospital’s accounts payable now stand at $12.7 million.

“Repealing the sales tax in its entirety would continue the many challenges we have when critical vendors are not paid timely,” said Peter John Camacho, Guam Memorial Hospital Administrator.

“These problems we encounter include credit holds until accounts are paid and made current. We encounter a higher cost for supplies and medication when we need to purchase the same items from another source—different from the original vendor—because of the credit hold.”

While the Calvo Administration still insists a sales tax is the quickest fix for education and hospital shortages, the Administration is quickly losing advocates.

Esteves now joins Sen. Joe San Augustin, the author of the sales tax law, with yet another vote to repeal, thereby solidifying what could turn out to be a veto-proof repeal of the sales tax. Sen. Tom Ada (D) has also changed his mind on the sales tax and voiced his support for its repeal.

While the sales tax may be finished before it starts, it remains unclear how cash shortfalls purportedly caused by the Trump Tax Cuts will be met, much less how an alternative funding source for GMH and the Dept. of Education can be found.

As expected, Gov. Eddie Calvo is reportedly disappointed with the legislature’s pending reversal. His administration continues to underscore the negative implications of repeal, including possible downgrades of GovGuam’s credit ratings, which are already under a microscope because of an anticipated budget shortfall without a dedicated funding source, such as a tax hike.

But that argument flies in the face of reasons given by repeal-driven lawmakers who complain that Rev & Tax is dragging its feet on approved hiring while neglecting to collect taxes already on the books.

Calvo’s stance also seems at odds with his own lieutenant governor, Ray Tenorio, who announced last week that he, himself, would favor the sales tax repeal if certain conditions are met.