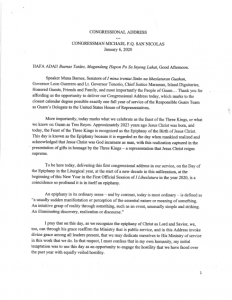 Congressman Michael San Nicolas is appealing to Guam lawmakers to repeal the local war claims bill signed into law last week by the governor and join him in pushing for passage of his own war claims measure that has not yet been acted upon by the U.S. Senate.

In his first Congressional address to the Guam legislature this afternoon, San Nicolas said the local effort is not going to succeed.

In a lengthy speech at the Guam Congress Building this afternoon, San Nicolas reviewed his goals and the major accomplishments of his first year in office … but it was his position on the enactment of the local war claims bill that most wanted to hear and he saved that for the end.

“Unfortunately, in recent days, yet a new challenge has presented itself in the push to pass H.R. 1365, this time at the local level. In light of all the challenges we had to overcome to pass H.R. 1365 in the House, it is very plain from my perspective that any alternative attempt to pass a federal measure to reimburse local expenditures is not going to succeed. Such a measure will be negatively scored. Members of Congress will scoff at the idea of expending federal monies to reimburse a single district’s choice to expend its own local funds, and no Member of Congress will support such an undertaking,” San Nicolas said.

Instead, San Nicolas suggested that senators repeal the bill signed by the governor last week and join him in an effort to get his own war claims bill passed by the U.S. Senate and sent to President Trump for his signature.

“It’s not too late. If we can agree to work together today, the legislature can repeal the local war claims process, take that risk off the table, and we can all get behind HR 1365,” San Nicolas said.

The congressman suggested that the local funds set aside for war claims be used instead to survey public lands.

“Setting aside an additional $14 million in local funds for a local war claims plan is admirable, but it just presents an unnecessary risk to the current process, and it is money that will very likely never be reimbursed federally. Instead, let’s work together to get H.R. 1365 passed,” San Nicolas said.

And instead of spending $14 million in local funds to pay war claims, San Nicolas proposed using that money to survey the lands assigned to the Chamorro Land Trust Commission.

“If there is $14 million in excess local funds available, a grand pursuit to address thousands of our people and decades of disappointment would be to pour that local money into surveying lands of the Chamorro Land Trust,” San Nicolas said.

He added: “Let the Feds pay for war claims the Feds owe with Federal Section 30 money. And let’s use our local funds to make good on what we owe to our local people waiting for their Chamorro land trust lands.”

In response, Gov. Lou Leon Guerrero issued a statement last night saying: “We will not ask any survivor to wait one more day than necessary.”

“The federal reassignment of claims process is already part of federal law. That is the process by which we will be repaid,” she said “Whatever influence Guam may have in Washington D.C., we hope it will be used to help this process, not hurt it.”

She added that “no one should pit Chamorro Land Trust recipients against the manåmko”.