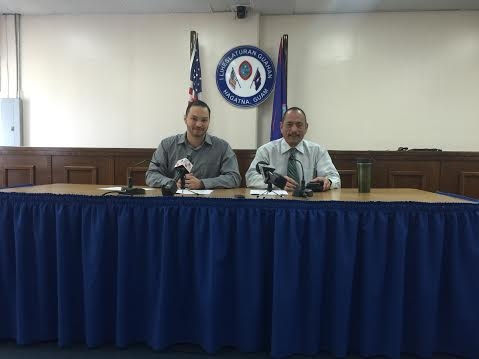 The new plan would lower employee contribution rates for hybrid plan down to 6.2%.

Vice-Speaker Cruz had already introduced a hybrid retirement fund plan when Senator Mike San Nicolas and Congresswoman Madeleine Bordallo announced in a joint press conference that the Congresswoman introduced a bill to extend the Social Security program to employees of GovGuam.

At the time there were questions of how that bill would work with the Vice-Speaker’s proposed hybrid retirement plan. Today the Vice-Speaker and Senator Mike San Nicolas announced that after holding several round table discussions with the retirement fund and other stakeholders they had come up with a bill that would essentially allow for a merger of the two. “With Bill 266-33 we are going to be embracing the proposal of a hybrid plan provided by the GovGuam retirement fund. It will be available only for existing employees. For new employees they will have the option of remaining in the defined contribution plan or participating in a new Guam retirement security plan that will mirror Social Security until such time that Social Security actually becomes available for government of Guam employees,” said Senator San Nicolas. San Nicolas says that this plan would reduce the proposed hybrid plan contribution rate from 9.5 percent down to 6.2 percent which is the same as Social Security. “So we’re going to be moving forward a plan that mirrors the contribution rates of Social Security across the board for the hybrid for the retirement security plan and eventually for Social Security when we do adopt it,” said San Nicolas.

To lower the employee contribution down to 6.2 percent San Nicolas says they will have to re-amortize the liability which in essence means that the payments will be spread out over a longer term. “We want to address the concerns of our current employees to be able to retire with at least some kind of floor and some kind of income in the future,” said Vice-Speaker Cruz.

This new plan would allow employees to either remain in the defined contributions plan, convert to the hybrid plan or convert to the Guam retirement security plan.

The retirement fund board has yet to see the bill but San Nicolas and Cruz say the board did participate in the roundtable hearings that were held that helped to craft the bill.

The bill will have a public hearing on the 29th of February and the Vice-Speaker says they will try to get the bill onto the session floor in March.