The Guam Housing and Urban Renewal Authority director is on the defensive after an online statement from Congressman Michael San Nicolas claims that the agency head is lying. 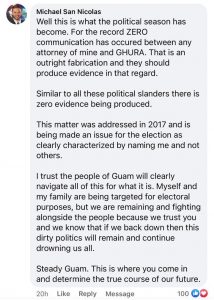 Ray Topasna had named San Nicolas as one of three elected Guam officials who owe repayments for what the housing agency says are historical conflicts.

According to Topasna, GHURA’s attorney already sent legal documents to San Nicolas. He says San Nicolas’ camp even responded to the documents.

But San Nicolas, on Facebook, wrote that there has been ZERO communication with any of his attorneys and GHURA… and that this is, “an outright fabrication and they [GHURA] should produce the evidence.”

Not taking the matter lightly, Topasna issued a statement to PNC News saying that with the Congressman’s permission, he’ll “release all the pertinent records (against the advice of counsel) regarding this matter since he [San Nicolas] claims this is all fabricated and suggested via Facebook that evidence be produced.”

“It’s not my preference, but it can be done,” said Topasna.

Saying the issue is politically motivated, San Nicolas says the matter was addressed in 2017 when he was still a senator and that since then, there has been no communication from the agency to the delegate’s side.

But on the air with Newstalk K57 this morning, Topasna insisted there’s no political agenda behind the issue.

“Their only communications with my attorneys was in 2017 when this matter was initially brought up and addressed and there has been no communication from this director or current administration with any attorneys of mine to date. They released my name in 2017 before there was any attorney involvement back then also. If they want to release legal documents from 2017 that is not what they are referencing in your story. They are saying they communicated with my attorneys about their recent actions and there are none. This director should produce THEIR documents showing their communication.”

GHURA is 100% federally funded and therefore has to follow federal rules closely. This includes a requirement for every elected official to disclose if they or a family member are Section 8 landlords.

“So the landlord, whether it be your sibling, an immediate family member: a brother, sister, mother or father, if you have an elected official say, that’s your brother, you would have to disclose that to us and then we would make a determination, whether to send that up to the feds for a waiver or whether you be disqualified,” Topasna said.

The Congressman isn’t the only elected official being served legal documents for repayment. Topasna said two elected officials of the Guam Legislature also received notices for having had a conflict, “encouraging them to help us resolve this matter.” Essentially, this means repayment of outstanding funds since somehow, the money needs to be paid back to U.S. Housing and Urban Development (HUD) and neither GHURA nor GovGuam want to be on the hook for that money.

Topasna would not name the senators as he said their lawyers had not yet responded and that he did not want them to find out through the media. He would not disclose if they’re sitting or former senators.

At the heart of the matter are long-standing cases dating back previous to 2019, prior to the current administration’s takeover.

While San Nicolas says the issue was resolved in 2017 for him, Topasna, on record with PNC News, says they were not and there’s still outstanding money owed to the agency.

Senator Joe San Agustin, the chair of the appropriations committee in the Legislature, had originally requested the letter from the Attorney General in July this year for an opinion on the repayment matter. San Agustin said the request for the letter came after the GHURA head sought to have GovGuam front the money to pay back the funds to the federal government in the historical cases.

In an interview on Newstalk K57 this morning, San Agustin said he didn’t believe the taxpayers should be on the hook for that money.

The AG responded to the letter a month later, on Aug. 31, saying the money DOES need to be paid back to HUD (the feds) and that while GHURA is liable, they can go after the responsible parties – ie. Landlords – for the outstanding money.


When asked why GHURA waited from the time of that AG letter until now, less than two weeks out from the general election, to issue the legal documents to San Nicolas and two still-unnamed senators, Topasna said: “With the change of administration, we did not have the complete files (perhaps by design). We really had to recreate a lot of the documentation and develop a chronological record for our attorney. In fact, GHURA reported to USAG and OAG that documents and emails were missing pertaining to past subpoenas and investigations. We also had to calculate approximately what was paid out and identify what percentage can be deemed conflicted. As an example, Section 8 contract may be 10 years old but elected official may only be in office for 4 years.”

GHURA says it reaches out to elected officials every election year for disclosure of conflicts. They then report this to the feds and only they can give a waiver in cases of conflict. None were given in these three cases.

Topasna says his preference is to just stop the conflicts and move on from the situation. However, he says since there was a directive from the federal oversight saying the money had to be reimbursed and the AG opinion on top of that, his hands are tied and the money must be paid back.

Senator San Agustin, on the air with K57 this morning, had a clear message for all politicians: “Any of you senators, if you have a home and it’s being rented to any of the GHURA clients, por favor, please don’t wait; terminate the contract and move on.”

San Agustin says he is not aware of who the two senators in question are, saying in no uncertain terms that it was not him implicated in any of the GHURA conflicts. “No, I’m not and I did not get a letter, and I definitely don’t have lawyers and no homes that I’m renting.”

“I checked all my siblings and told them if they own one [section 8 housing] to get them off. My brother owns some homes and apartments on Guam, he had one but he terminated that one,” said San Agustin.

Topasna says he encourages the three implicated officials to reach out to the agency to resolve this amicably, and get the money paid back.

On her own, Speaker Tina Muna Barnes issued a statement saying she is not one of the senators in question.


As of news time, GHURA had not yet heard from the lawyers of the two senators also served with legal documents for repayment.

Topasna says he will announce their names as well when their lawyers respond.