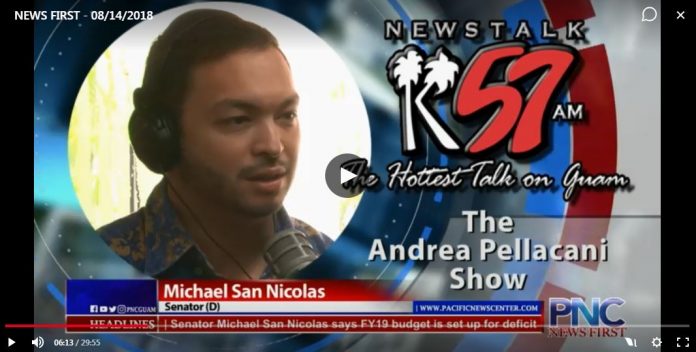 As the governor and his fiscal team review the FY19 budget, they’re finding common ground with lawmakers, mixed with a few bones of contention over the General Appropriations Act of Fiscal Year 2019, passed by the Legislature on Saturday. Here we consider the perspective of one senator who voted against the budget.

Guam – Under advisement? Or who’s on first? After some confusion over whether the Calvo Administration had received a copy of the FY19 budget passed by the Legislature over the weekend, it’s now clear that the spending plan is under executive review.

Whatever the case, throughout the budget-making process, the administration has expressed a liking for such tax increases as wound up in the budget that finally made it out of senate chambers. Taxes such as hikes on cigarettes, real property, and business privileges appear to be favored over further cuts, since it became apparent that the federal Tax Cuts and Jobs Act would leave the approaching budget year $145 million short.

But the administration has its bones to pick over the inclusion of $78 million in Section 30 funds tapped as a budget funding source, because it still doesn’t know whether the US Treasury Dept. will honor the island’s request to remit that much money in projected federal taxes to be collected and appropriated into the forthcoming territorial budget.

Adding a twist of irony to the unfurling tale, consistent Calvo Administration critic and sitting majority senator Michael San Nicolas (D) actually agrees that the bipartisan group of his colleagues that voted to pass the latest version of the budget out of the legislature is skating on thin ice.

“And [the budget] also adopts a higher Section 30 figure, which, with an additional $10 million, that really is just going to result in a deficit,” San Nicolas told Newstalk K57 midday host Andrea Pellacani on Tuesday.

Any loyal insider of the Calvo Administration would tell you that much. But San Nicolas has his own perspective on why this reliance on Section 30 isn’t in the best interest of sound fiscal management.

San Nicolas: money’s spent before it ever arrives

“One of the truths about Section 30 is that we budget for it, but the reality is that every governor always spends it before it even hits the coffers,” he said.  “They wipe out all the Section 30 money to catch up on the tax refunds, because they don’t make deposits in the tax refund trust fund over the course of the year. So anytime you increase the Section 30 number, we’re basically just inviting a deficit for the coming fiscal year.”

Furthermore, San Nicolas alleges that the administration plays fast and loose with accounting standards to further its own political ends at a time when it should be pursuing tax evaders who’ve eluded revenue collectors and shortchanged the budgeting process.

“Well, it’s actually pretty consistent with how this administration has been playing the shell game with funds,” the senator said. “And at times, Andrea, there’s two ways to do it. You can do it through accrual, or you can do it through cash. There is some modified accounting that allows you to bend those, but anytime you begin interchanging between accrual accounting and cash accounting, you screw up the books. But what this administration does is it jumps between accrual accounting and cash accounting, depending on what argument they’re trying to win for the day.”

PNC is still awaiting the Calvo Administration’s take on the FY19 budget.