Congressman Mihttps://pncguam.com/wp-admin/post.php?post=172972&action=editchael San Nicolas issued a release this morning advising that he is unable to expedite local war claim applications.

In his release, he says the governor’s war claims processing center is issuing slips of paper to survivors telling them to contact him to expedite their war claim processing.

“This is not something the Congressman is able to do,” San Nicolas stated in the release.

The congressman says its “pretty incredible that they are so willing to mislead the people in order to plow forward and save face, rather than just be honest and admit that their process didn’t include everyone.”

However, the governor’s Chief of staff Tony Babauta says the administration is not asking him to do that.

The slips of paper being handed out say nothing about urging the Congressman to expedite war claims.

They merely provide the name and contact numbers for Speaker Tina Muna Barnes and San Nicolas. 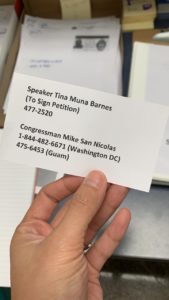 The slips of paper that are being given out at the processing center are being provided to survivors who have not yet filed a claim but would like to do so now.

Babauta told K-57’s Patti Arroyo that the process to file for a claim ended in 2017 and its estimated that hundreds never submitted war claims. He said it would take an act of congress to re-open the process again.

Speaker Tina Muna Barnes has begun circulating a petition to urge Congress to do that. And as Guam’s representative to Congress San Nicolas can play a role in jump starting that process, said Babauta.

“When it comes to introducing legislation, that’s the delegates job in Congress,” said Babauta.

“So, we have a slip of paper that has both Speaker Tina Muna Barnes’ name and contact information and delegate San Nicolas’ name and information,” said Babauta.

In addition, the governor’s office released a statement in response to San Nicolas’ release which says “the Congressman’s claim is untrue.”

The Governor’s Director of Policy Carlo Branch is quoted as saying “whether or not we have a Congressman willing to reopen the War Claims window is a question no one can answer but him.”

READ the release from San Nicolas in FULL below:

Please be advised that the Governor’s war claims processing center is issuing slips of paper to constituents they are unable to help, telling them to contact Congressman San Nicolas to expedite their war claim processing.

This is not something the Congressman is able to do.

“We continue the work on HR 1365 and anticipate passage pending the conclusion of impeachment proceedings,” Congressman San Nicolas concludes.

READ the response from the Governor’s office in FULL below:

Hagåtña, Guam – The Office of the Governor issues the following statement in response to Delegate San Nicolas regarding the processing of Guam War Claims applications.

“The Congressman’s claim is untrue. It is true, however, that many of our manåmko’ missed the federal deadline to file a claim under the Guam World War II Loyalty Recognition Act. Reopening that window requires an act of Congress and survivors and their families have asked how to contact the Delegate’s office. The processing center is directing these constituents to contact the Delegate, as well as Speaker Tina Muña Barnes who is compiling a petition for this purpose. The ‘slips of paper’ referred to by the Delegate has both his and Speaker Muña Barnes’ contact information,” said Carlo Branch, Director of Policy.  “Whether or not we have a Congressman willing to reopen the War Claims window is a question no one can answer but him.”