The proposal is being called the Heroes Act. During an online news conference Wednesday, San Nicolas said it includes $2.4 billion from the Coronavirus Relief Fund for the government of Guam.

The measure is expected to be passed by the Democratic-controlled U.S. House, but its chances for passage in the Republican-controlled Senate are dim. 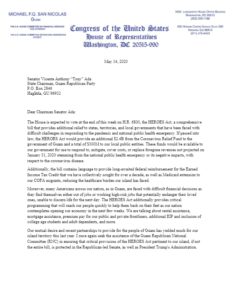 In his letter to former Senator Ada, San Nicolas asks for the assistance of the Guam Republican National Committee “in ensuring that critical provisions of the HEROES Act pertinent to our island … (are) protected in the Republican-led Senate, as well as President Trump’s Administration.”

In his release, the Congressman notes the recent successful collaboration between himself and the Guam Republican party in securing passage of the war claims correction bill. And he expressed confidence that that “bi-partisan partnership … will once again protect these valuable territory provisions … as the measure clears the House and is considered by the Republican-controlled Senate.”

With the “support of the Guam RNC” writes San Nicolas “we can again see to it that the people of Guam are secured and not excluded from critical federal government programming that is offered to our fellow Americans in the mainland.”

READ the release from Congressman San Nicolas in FULL below:

“HR 6800 contains many provisions that will directly benefit Guam, including addressing legacy issues such as a 75% rebate of our Earned Income Tax Credit costs (EITC), and a billion dollar pool of funds to fix GMH,” opened Congressman San Nicolas.

“Perhaps most significant to the pandemic in HR 6800 is the creation of the HEROES Fund which provides public and private frontline and essential workers with a $13 per hour raise on top of their pay, capped at $10,000, for the duration of the pandemic emergency,” Congressman San Nicolas added. “These are our nurses, doctors, medical assistants, police officers, firefighters, grocery workers, taxi drivers, convenience store clerks, warehouse crews, security guards, truck drivers, media personnel, and many many more who put themselves in harms way daily so that we can continue the fight against COVID-19, and they all deserve our support,” Congressman San Nicolas continued.

“I am confident that our bi-partisan partnership that has helped secure War Claims passage and CARES Act passage will once again protect these valuable territory provisions we have secured for the people of Guam, as the measure clears the House and is considered by the Republican-controlled Senate and Executive Branches,” Congressman San Nicolas concludes.