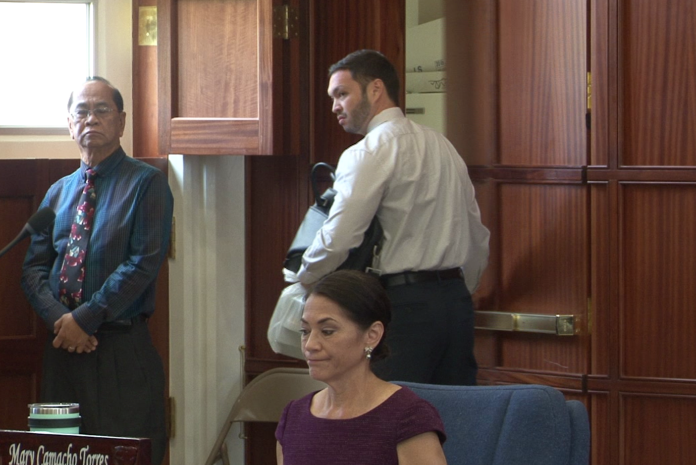 Guam – Today the Legislature approved Sen. Michael San Nicolas’ resolution to amend the Organic Act in order to force monthly allotments towards the pay-down of tax refunds. But his attempt was not without a fight.

“Just for clarification, Mrs. Speaker, I will, I will depart and there will be no quorum to continue,” announced San Nicolas during session this morning right before he picked up his belongings and stormed out of session hall following heated debate over his Resolution 310.

Not all of San Nicolas’ colleagues are on board with his approach. Senator Therese Terlaje said San Nicolas’ resolution hands more power to the federal government and uses a late senator’s name in vain.

“I believe this resolution sends the wrong message, not only to Congress about what the people of Guam are capable of, but to the friends and supporters of Senator Ben and his legacy,” Vice Speaker Therese Terlaje said. “He was a staunch advocate to the repayment of tax refunds and of the system of checks and balances.”

San Nicolas, who is running for Guam’s lone, nonvoting delegate’s seat to the U.S. Congress, is pushing to amend the Organic Act in the name of late Guam Senator Ben Pangelinan. His attempt amounts to a direct appeal to Congress via Resolution 310.

While the existing Trust Fund law already mandates regular tax refund revenue set-asides for timely refund payouts, the reality is that Adelup controls all budgetary expenditures, juggling and borrowing to pay refunds and other accounts payable on time – and avoiding Tax Refund Trust Fund payments to do so.

“We do not need more federal restrictions, we need less,” Terlaje said. “This is not a time to give up and hand power over to the colonizer because we can’t get our way.”

“The notion that we’re somehow running to our colonizer to solve our problems makes no sense to me when this is our very own solution,” San Nicolas said. “This resolution…is not an abdication of our ability to self-govern, it is an acknowledgement that we know what has to be done and we’re going to do whatever it takes to make sure it happens.”

The Organic Act is the closest thing Guam—as an unincorporated U.S. territory—has to a constitution. And if it is changed in the way San Nicolas wants it changed, it will force any governor’s hand into regularly setting aside sufficient revenue for the timely payment of tax refunds, in order to avoid costly bond borrowing.

After taxpayers spent years waiting to get their refunds back, in 2013 a federal permanent injunction finally forced all Guam governors to pay tax refunds back within six months of filing. But because annual GovGuam budgets are always so tight and tax collections are ever-struggling to keep up with public expenditures, administration after administration has constantly turned to the bond market to borrow money for timely tax refunds at interest.

While not all of his colleagues entirely disagree, some worry San Nicolas is attempting to cede too much authority to the federal government at a time when the push for self-determination is on the rise.